Future of robotics is in the hands of tech students

Humber student Jonathan May knows that one day, robots will do a person’s job without a human presence.

That’s how advanced robotics have become in the last few years.

“The advancement of robots leads to job integration, as they can be placed in most jobs and eventually all jobs in the future,” May said. “Assembly jobs are frequently completed by robots, rather than a person working hands on.”

May adds at least for now, humans will still need to supervise and monitor machines.

“For now, many jobs still require people’s presence, as machines have more advanced stages to go through,” May said.

May entered the program with an estimated 119 other students, and continues to study in his final year.

Robotics is one of many aspects he is studying in his program, in his final-year at the North Campus.

David Van Anlesvoort, another third-year student, has also gained some work experience, corresponding with his studies in the electromechanical field. 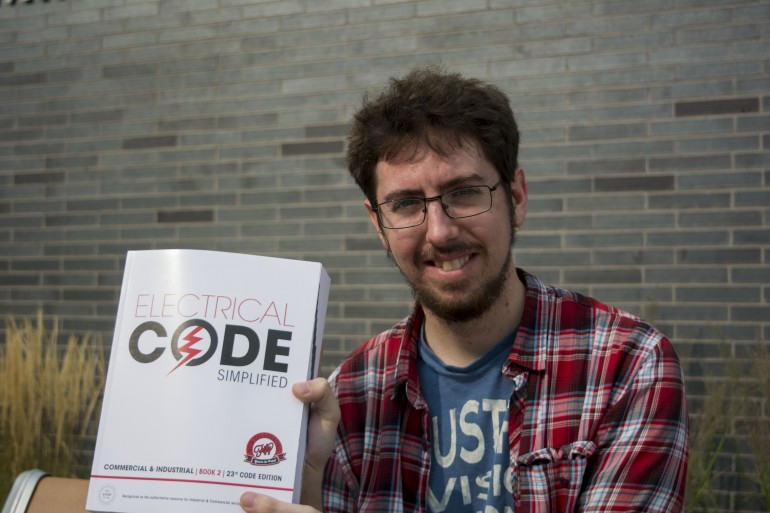 Humber student David Van Anlesvoort has knowledge about electrical coding, but will learn more from his readings in the textbook Electrical Code Simplified, purchased from the bookstore at the North campus

He worked at GIT Security Systems assisting in the installation of alarm systems in the summer of 2017.

Anlesvoort’s task is to place wires in houses under construction.

“It’s easier to run wires in houses under construction because there are no walls in the way,” he said.

Anlesvoort then installs the alarm panels and sensors and tests the alarm system’s functions.

“This process takes about one to three days, including the consideration for minor mistakes,” he said. “Major mistakes such as construction workers taking apart the wires could take up to one additional day (at the least) to identify and fix the issue.”

Anlesvoort’s work experience is similar to what May said about getting practice.

“Many friends and classmates have higher employment opportunities, throughout the duration of this program,” May said. “On many occasions companies visit and express their interest in students working for them.”

Some students work during the summers or obtain an internship, which gives them a higher chance of graduating with a full-time job.

While coordinator and professor Tyler Clapperton agrees work experience is valuable, it goes back to the content being taught in the course and how it is presented.

“One major reason electromechanical engineering is effective, is because students are being taught integration,” Clapperton said. “When I worked in the field, I worked as a team because other people had their own positions, which was essential to the job.”

He said students are learning the skills of each position now so they are well prepared later in third-year.

“By third-year, many students will take the skills they have and put them together,” he said.

Clapperton recommends students take the three-year program instead of the two-year, to learn how to further develop their skills.