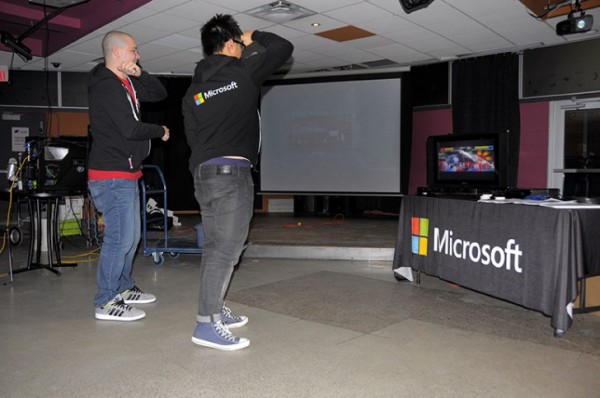 The third annual Gameapalooza that took place at Humber’s LinX Lounge at North campus on Nov. 29 had many students asking why something this cool doesn’t happen more.

Hosted by Humber’s game and computer programming professor Lynda Houseman, Gameapalooza is a chance for first and second year students in the game design, computer programming and 3D animation courses to mingle and meet each other as well as graduates, to help them become more comfortable in the program. The event was complete with free pizza, video game themed drinks and a wide array of systems ranging from original Nintendo all the way to the new Xbox One and PS4.

“We always talk about the grads in class so I wanted a night where the different grades can meet,” said Houseman. She said that the purpose of the event is to harbor a feeling of community among the grades, as the independent gaming community in Toronto is considered large and friendly.

Theresa Cann, 21, in the 3D animation program, came out for the first time and liked the atmosphere. “I’m not an avid gamer but I came out because it pertains to my field and to have fun and maybe pass on some knowledge.”

The reception from the students was widely favourable. Nhid Slkander, 24, who is a first-year student in game programming, really enjoyed his first time at Gameapalooza. “It’s pretty sick,” said Slkander, “There aren’t a lot of schools that do stuff like this.” Though the night had only begun, Slkander said he planned to have a few drinks and try to get in on a game of Super Smash Bros.

Even guests from Microsoft, invited for promotional purposes seemed to be enjoying the event. Kareem Wong, 21, met Houseman last year at “Gamer Camp,” a similar gaming festival in Toronto, and was invited to come out and promote an app creation contest for Microsoft. “There’s so many games from my childhood here,” said Wong, “I like the vibe. These are my people, you know?”