Awareness Week this year focused on transgender issues as a way of highlighting the Gender and Diversity Policy that Humber released in February.

“The policy is in place but there’s still a lot of people who don’t know a lot of the details and are maybe afraid to ask,” said Thomas Silcox-Childs, co-chair of the GSDC.

Designed to raise awareness of transgender issues and funds for the telephone helpline LGBT Youthline, the Genderbread cookie event drew in passersby with traditional gingerbread and shortbread cookies, and volunteers handing out literature on transgender awareness.

“Gender is more than the binary (of male and female),” said Silcox-Childs.

“Who you love is in your heart, your genitals identify your assigned sex, which may or may not be different from how you feel in your head, which is often referred to as your true identity by those who don’t find a match, and then how you choose to dress or present yourself on a daily basis, what other people see, is your gender expression,” he explained.

Several Humber students within the LGBTQ+-identified community dropped by the main concourse at the North campus to donate a few bucks, grab a cookie, and show their support.

Monique Lee, a fourth-year University of Guelph-Humber Family and Community Social Services student, 21, heard about the event through a GSDC email.

“It’s really helped me in terms of having a channel to talk about my feelings and stuff that I go through. It brings a sense of community so everyone knows ‘hey, you’re not the only one,’” Lee said.

Roberta Fuller, not her real name, a second-year Architectural Technology student who isn’t yet out in her community, said she stopped by the Genderbread sale to show her support, promote awareness, and hopefully help draw more people to the action.

The journey is still on-going for Fuller.

She said she’s seen a dramatic change in the amount of support on campus in her two years at Humber.

“When I first got here, there wasn’t really anything going on, so now I feel that a lot more people are interacting and openly talking about these issues,” said Fuller. “I think Humber is moving in the right direction.”

Fuller also encourages students questioning their gender identity or sexuality to stop by the weekly discussion groups, saying it’s a safe and confidential space to talk about personal feelings, especially for students who aren’t yet out.

Awareness Week rolled on with events including film screenings, fundraisers and workshops, all with the singular purpose of raising awareness about transgender issues. 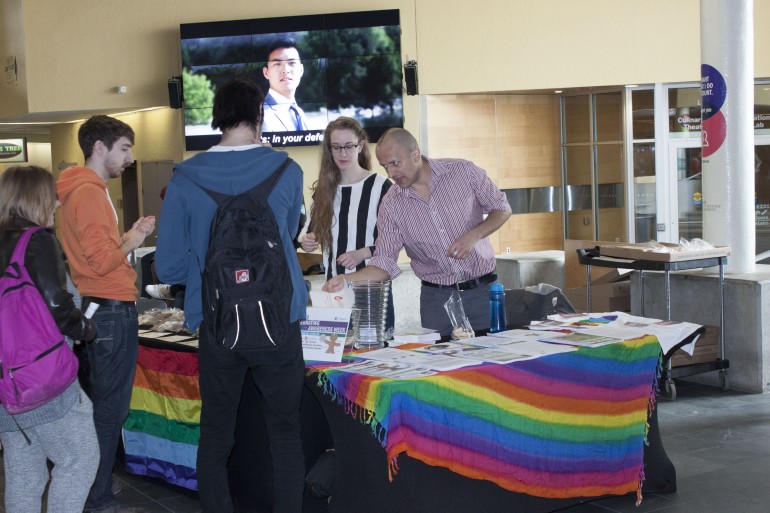 Student, staff and faculty were treated to sweets and education on transgender issues at Tuesday’s Genderbread cookie sale at the North Campus.

Although the public understanding of transgender issues and gender identity is growing, GDSC says one of the biggest challenges is the harassment and discrimination that transgender and non-conforming individuals can face.

One space where this harassment can take place is public washrooms. Enter the Safe Inclusive Washrooms campaign, whose posters were unveiled as part of Awareness Week.

The campaign is designed to help foster safer washrooms that everyone can use without fear or anxiety and the posters, to be hung in all washrooms on-campus, will feature photos of real people – to “put a real face” to the word “transgender,” according to Silcox-Childs.