Giant whale sculpture “Spyro” makes a splash by the lake

Spyro the whale — a sculpture of a whale’s tail burdened with the message about plastic pollution in oceans — has moved. Over the summer, Spyro was found around North campus, but now it resides at the Lakeshore Grounds Interpretive Centre.

Inside the sculpture are hundreds of water bottles. The tail represents the overwhelming waste found on Humber’s campuses.

Spyro was created by the Office of Sustainability and is part of its “Take Back the Tap” campaign.

The initiative promotes alternative sources of water. The 360 degree exhibit encourages students to stop using single-use plastic bottles.
“It’s a bit of a lifestyle change, and so it takes some time, some practice and commitment,” said Jennifer Bazar, Curator of Lakeshore’s Interpretive Centre.

She said the whale is part of Humber’s move to ban disposable water bottles by 2022. In the months leading up to the new semester, both campuses asked students to recycle their bottles. 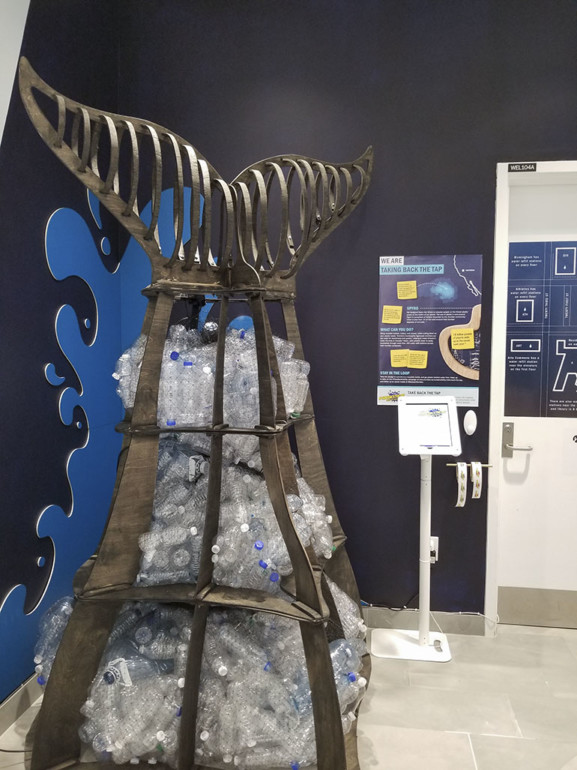 A lot of the recycled bottles created Spyro.

“All the plastic water bottles that are inside Spyro — they’ve all been used here at Humber College,” said Bazar.

“They were collected, and are only a fraction of what we collect on an annual basis.”

Eryn Fletcher, a third-year student in the International Development program, said she recognized the large whale from its earlier debut at North campus.

“It’s pretty intimidating. It has a big message of conserving water bottles and different things, so it has a big impact and it can speak to students that way,” said Fletcher.

Fletcher said she connects with Spyro’s goals to clean up the environment, one reusable container at a time.

“It has more motivation for me to do my part in conserving the plastics that I use, and reducing them in my daily life,” she said.

A recent study by statistics company GlobalData said more than 50 per cent of consumers are motivated to buy reusable products.
Bianca Scotland, the Lakeshore principal’s assistant, said her long shifts on campus are fueled by keeping a water bottle within arm’s reach.

“A lot of the time if you’re at the desk in your office pretty much from nine-to-five, I think it’s important to have good access to water and that means keeping yourself hydrated,” she said.

Scotland said people needed to be mindful of what kind of container they kept that water in.

“Are you using a reusable glass or a disposable cup? That might kind of be a point of reflection that we all need to think about being as sustainable as possible,” she said.