Grad makes the cut at Splendido 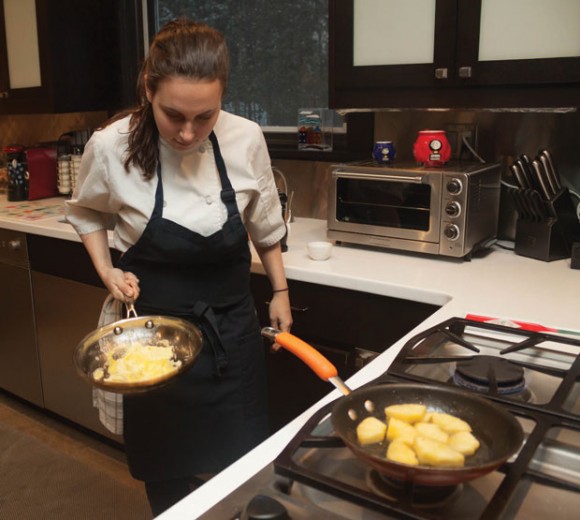 Using a knife was all Ali Grundman could think of after her first day of class in the Culinary Management program at Humber College four years ago.

“I went to the grocery store and bought three bags of carrots, four stalks of celery, and I just stood in my kitchen and practiced my knife skills,” she said. “I think for about two months my dad took veggies and dip and stir fry to work.”

In her second year, she landed an internship at one of Canada’s top fine dining restaurants, Splendido in downtown Toronto. “I started off where we put all our interns, picking parsley and coriander stems,” she said.

Throughout her internship, Grundman followed the advice from her teachers at Humber – always say, “oui, chef.”

“I took it literally. I did not talk to anyone, if I was told to run downstairs to get something I just put on a smile and went to get it,” she said. “I was a new addition to their team and I had to gain their trust. At the beginning nobody talked to me, but slowly they started asking questions about my life.”

“Ali has a big heart, lots of ambition, knows when to take slack and when not to. Her palate has improved a lot, and that comes with cooking.”

She said prospering in the culinary profession is not always about skill.

“Anyone can cook but if you have a good attitude, you can be hired anywhere,” Grundman explained.

Rudi Fischbacher, the culinary program coordinator at Humber, backs that up.

“They can train the other skills to you, but if you come in with a good attitude and a smile, ready to go, they’ll work with you,” he said.

“Great students are devoted to what they’re doing. The biggest thing that struck me [about Grundman] was that she was very punctual, had a pleasant personality, and was ready to learn.  All the things you look for in a student,” he said.

When asked about her ultimate goal, Humber seemed to be on Grundman’s mind.

“I think what Splendido has given me I can bring back to Humber and help future kids figure out what they really want,” she said.