Grad seeks justice for brother who died in Ontario jail

Soleiman Faqiri sat alone in a prison cell, isolated from the rest of the prison population at Lindsay’s Central East Correction Facility.

The 30-year-old schizophrenic man was being held in solitary confinement at the “super jail” in December 2016 awaiting transfer to a mental health facility for treatment. After being segregated for 11 days, Faqiri was found dead in his cell and, while a coroner’s inquest is pending, his family has few answers to their questions.

“I suffer, my family suffers, my mother cries every day and my dad is not the same,” activist and brother Yusuf Faqiri told public administration students in a presentation at Lakeshore campus last Thursday. “We want the individuals who took my brother’s life to be held accountable.”

The details left students in tears and sympathetic for what they say is the unjust death of a mentally ill Canadian man.

The Canadian jail system failed for the Faqiri family, who have no explanations yet as to what happened. Those questions that tore the family apart.

Changes to how solitary confinement is applied in Ontario were implemented, but too late for Soleiman.

A consent order was issued by the Human Rights Tribunal of Ontario on Jan. 16, which would effectively end the use of segregation of mentally ill inmates. Ontario ended the use of segregation across its 26 correctional facilities for people with a mental illness, barring exceptional circumstances.
The tribunal’s order follows a B.C. Supreme Court ruling that declared solitary confinement for indefinite periods as unconstitutional.

With a message of peace and the need for accountability, Yusuf Faqiri returned to Humber’s Lakeshore campus for the launch of his “tour for justice.” 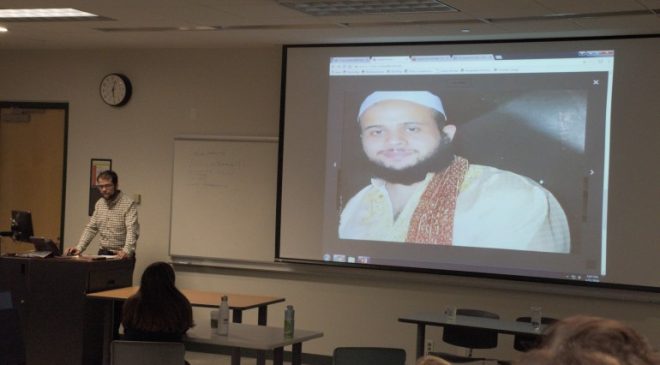 Yusuf Faqiri stands in front of the public administrations class at Humber’s Lakeshore campus. While holding back tears he showed a photo of his brother, who was killed by correctional guards in a Lindsay prison. (Daniel Caudle)

The former Humber grad returned to the very room he used to learn in while he was a student in the Public Administration program to kick off his tour.

His emotional speech embodied the need for justice through a vivid display into Soleiman’s life. Featuring images, videos and heartfelt stories of growing up, the speech was a powerful light shining onto what his family has faced.

Through teary eyes, Yusuf delivered a powerful 45-minute speech that had a lasting impact on the students present in the room. Throughout the speech, tears could be seen falling from the students face.

“I have a very strong support system. I physically go to the gym to let my mind heal,” said Yusuf. “I have a counsellor, and my faith is very important to me.”

With plans to tour across Ontario and Quebec, Yusuf will be going to some of the biggest universities, such as University of Toronto, Carleton and McGill.

Soleiman’s body was covered with more than 50 blunt force trauma injuries, a gash across his face, his hands and feet in restraints, and there were allegedly 10 to 20 guards involved in an incident, and Yusuf says the family wants justice.

In an attempt for some closure, the family sought to obtain more details through a Freedom of Information request. Included in these requests were transcripts of 911 phone calls, medical reports, and most importantly the video surveillance footage from inside the jail.

Those details are expected to be revealed at the inquest, announced last November, a week after it was reported the unspecified number of guards involved in an incident involving Soleiman will not be held criminally liable in the death.

“He was vulnerable,” Yusuf said of his brother. “My family has no information, not even the names of the guards.”

A GoFundMe campaign has been set up by the family to help cover the costs that will and have been incurred in finding information relating to Soleiman’s death.

According to the campaign, “This critical fight for justice will require significant resources. The family has been advised that it will require approximately $50,000 to support its legal challenge, including an inquest — an amount significantly beyond their means.”