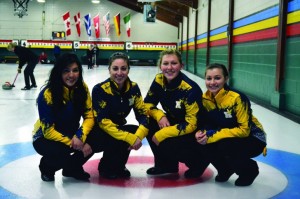 Photography by Willy Phan
The Humber Hawks women’s curling A Team celebrates after a victory over a private team at the Weston Golf and Country Club. Left to right: Grace Esquega, Gen Bernier, Kateryna Tepylo and Sarah Jagger.

As they prepare for the OCAA championships, the Humber Hawks’ curling teams are trying to learn from their wins and losses.

Most recently, the women’s A Team found success, winning two games against the Fanshawe Falcons and Seneca Sting, to take home the Winners Cup at the Humber Bonspiel on Jan. 10.

“Fanshawe and Seneca. . .I think both of those teams are going to be pretty up there at provincials,” said Sarah Jagger, lead for the women’s A Team. “We got a little taste of how they play and what we need to work on to make sure we’re successful at provincials.”

To go with the A Team’s success, the women’s B-Team split their two games by defeating the St. Clair Saints 6-3, before losing 8-4 to the Mohawk Mountaineers at the Bonspiel.

However, both of the men’s teams were less successful at the tournament. The A Team tied with Fanshawe 4-4 and lost to the Saints 5-4, while the B Team lost 6-4 to the Mountaineers and fell 8-1 to the Sting.

The Hawks curling teams used the Bonspiel games as a way to strengthen their game plans for the big stage in Sault Ste. Marie, and mixed team member Kyle Mills, found the tournament to be a success despite losing a few games.

“Every game provides us a chance to scout opponents, gather some pointers and figure out how we can connect better,” said Mills, a second-year recreation and leisure student.

“She’s very enthusiastic and supportive,” she said. “She fosters a great environment for us to learn and thrive in.”

The Humber Hawks have also paid close attention to curling tournaments on television as part of formulating their strategies.

“Actually, the more they watch on TV, the better,” said Bishop, a seasoned curling coach who also teaches the game at the Weston Golf and Country club.

Bishop said her teams finished practice and watched the finals of the Ontario men’s curling championship. Afterwards, the Hawks discussed strategies based on the men’s game they watched.

Once the Hawks are finished with the OCAA Championships, they won’t have much time to celebrate or rest. Humber’s curling teams will face their next challenge, taking on the best colleges across the country at the CCAA Championships at the Soo Curlers Club in Sault Ste. Marie, Ont. from March 18 to 22.