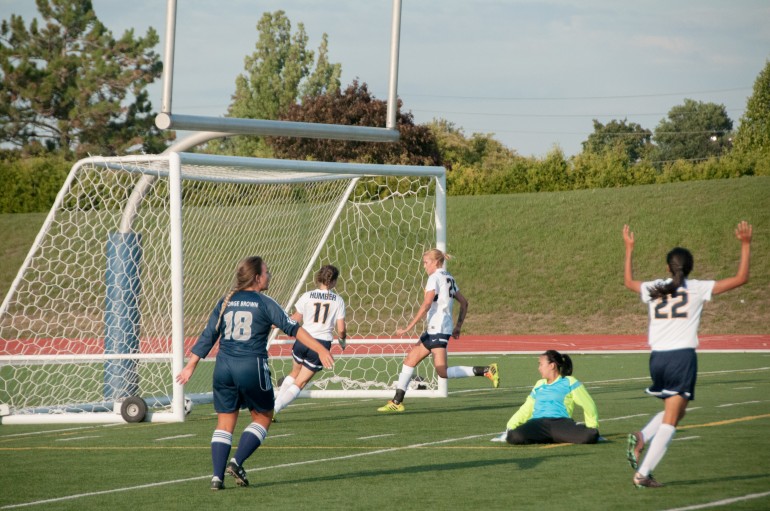 The Humber women’s soccer team has kicked off an excellent start to the season.

Head coach Vince Pileggi, in his 20th season as head of the Humber Hawks, said the coaching staff knew the team was being filled with talented players.

Hawks co-captain Alexandra Giannone said it’s an honour to have been named to the position, and she knows and accepts the extra responsibilities that also come with being a senior.

“Being the senior on the team I feel like we gotta come out and help out these rookies and show them the reins and guide them for their future,” she said. “They’re more than capable, very talented girls.”

The Hawks have 17 first-year players on the roster this year. Pileggi said this is an unusual team this year with the addition of many rookies and young players.

“Typically we’re loaded with veteran players, but this year we have the opportunity to work with some young players,” he said. “The good thing is that they’re very talented, they’re very skilled, and they’re very eager, which makes practises a lot livelier.”

One of the many rookies on the team this year, Rebecca Spratt, said that being on a team with so many new faces, the atmosphere around the team is positive.

“There’s a lot of good vibes, it’s all about positivity,” she said. “With a lot of new players, new faces, everyone’s getting along.”

Last season the Hawks lost in the quarterfinals of the OCAA Women’s Soccer Championship after winning the Central Division during the regular season. Pileggi said while the team may be young, the team has high expectations.

“The expectation is to always win the provincial championship,” he said. “Even though we’ve got a young team and we lack a little bit of experience, we believe that we’ve got the depth and the talent to win the championship.”

Hawks co-captain Spratt said the expectations the team has for itself is to have a good year.

“We all feel good about this year,