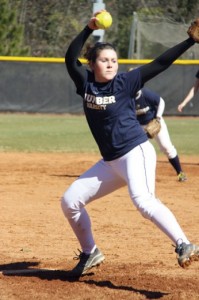 The Humber Women’s fastball team went down south during reading week and shocked some Americans.

A week in Columbia, South Carolina resulted in a five and three record for the Hawks who won five of their last six games including a two game sweep of University of South Carolina – Sumter.

“We were going down there to do something special, and I think this team did something really special,” said assistant coach Duaine Bowles.

The week featured games against teams from several leagues including the National Association of Intercollegiate Athletics, Junior College teams and teams from the NCAA.

Going into the week, the big game circled on the schedule for the Hawks was the doubleheader scheduled against NCAA division I team South Carolina State University, which was cancelled due to inclement weather.

Despite not playing South Carolina State, the games did not lack intensity. NAIA team Southern Wesleyan put the pressure on quick by laying down bunts right from the get-go, he said.

“It looked like it was going to be a couple of scrimmages,” said Bowles. “But once the games started, they were very competitive.”

Playing like a team was the reason the Hawks took five of eight games played from their favorited American counterparts, according to first year utility player Jess Crudo who is in the business administration program.

“We were going in as the underdogs and we pulled through actually being on top of them,” said Crudo. “Everybody thought that we were going to lose all 10 games but clearly we didn’t.”

“It felt like we were back at the OCAA (championships),” said Crudo referring to the competitive nature and excitement surrounding the exhibition games.

A lot of credit was given to the new coaching staff headed by new coach Lauren Spohn who has helped gel the team together immediately according to Manager of Athletics and Sports information, Jim Bialek, who traveled with the team to South Carolina.

“This whole trip was about establishing all around coaching and athlete relationships, expectations and moving forward as far as the needs to win another championship,” said Bialek.

The team looks forward to taking the level of play they saw in South Carolina to the OCAA next season, said second year outfielder Jenna Clarke who is in the fitness and health program. ”We need to make sure not to judge any team just by the looks of them, and not take anyone easy.”

The women’s fastball team kicks off their next season in the fall semester.