The Humber Hawks — ranked number three nationally and number one in Ontario — crushed the St. Clair Saints on Dec. 1 with a game jam-packed with multiple dunks, monstrous blocks and smart passing.

The Hawks ended the first quarter with a six-point lead, then pushed ahead in the second quarter with a 30-point run, only allowing the Saints seven points. 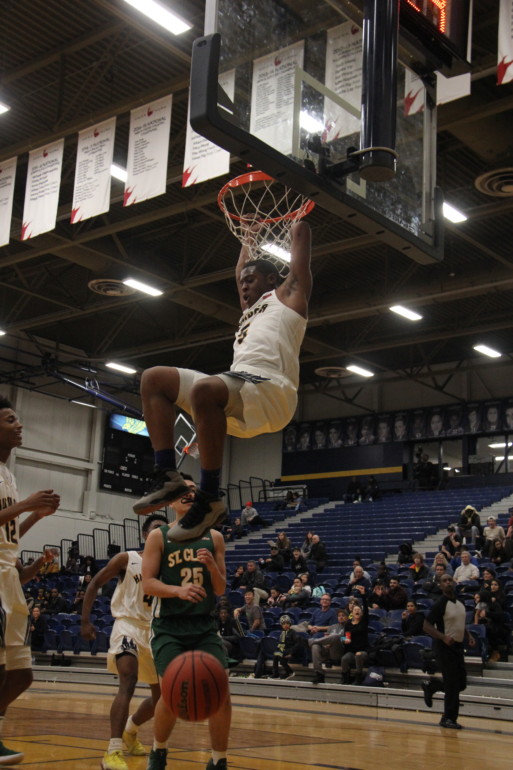 Micqueel Martin makes another slam dunk in the last quarter of the game. (Paige McGowan)

Coming off the bench mid-way through the second quarter, Jimmy Rich got both the crowd and the bench off their feet with two back-to-back dunks.

Immediately after, an offensive charge was called on St. Clair and it seemed everything was going right for the Hawks.

The Hawks entered the second half with a 29-point lead with a score of 58-29.

The Saints scored 10 more points than the Hawks in the third quarter but it wasn’t enough to catch up.

As if two dunks in one game isn’t enough, Micqueel Martin also had a big dunk near the end of the game to help push his team over the top.

Scoring 29 points in the fourth quarter, the Hawks cruised to a final score of 100-71.

“We shared the ball, we stuck with it and listened to the coaching game plan,” said top-scorer of the game Jaylan Morgan.

Jaylan Morgan was an artist in the paint, finishing off the game with 19 points, shooting 85.7 per cent from the field.

Six players finished the game with double-digit points, four of which were players that came off the bench.

St. Clair is known for allowing a lot of three-pointers and the Hawks took advantage of this and as a team finished the game with nine three-pointers made.

“There have been a lot of close games and a lot of details we still need to work on,” Assistant Coach Chad Bewely said.

“We played really good in the first half, had a lot of energy, we got a little lackadaisical towards the end but it’s okay, we’ll be able to look at this over Christmas and be ready for the second semester,” Bewely said.

This was the last game of the semester.

Humber will be returning to more OCAA action after the winter break, facing St. Clair again in an away game on Jan. 12.