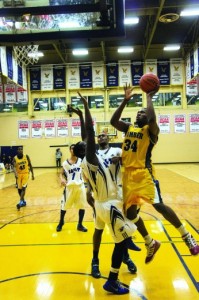 Making the games more difficult for the Cougars, said head coach Greg Mapp, was the fact that Sault was missing more than half of their starting five to academic ineligibility, a situation Humber is familiar with themselves.

Tyrone Dickson, a second-year power forward for the Hawks, sat out the first half of the season with academic ineligbilty, but the Hawks have been undefeated since his return. They continued that with Saturday’s 83-31 win, and an 85-51 victory on Sunday.

“(Humber’s) a good team,” said Mapp. “They’re not just trying to win our league, they’re trying to go to nationals every year and win.

“Given the way we played (Sunday), we executed, we did what we wanted to do, but we’re just not as good as Humber. It’s just that simple,” Mapp added.

Rookie shooting guard, Junior Davis, and third-year centre, Greg Edelsward, who contributed 30 and 29 points on the weekend respectively, led the Hawks to their weekend sweep. Dickson shone at the both ends of the floor with 21 rebounds, 10 blocks, and 14 points, including a double-double in Sunday’s win.

Despite two lopsided scores, the wins were extremely important as they allowed the Hawks to keep pace with Mohawk College, who themselves earned two wins on the week. The Mountaineers sit in a tie with Humber for second place in the West Division with identical 12-3 records.

The games were also an opportunity to work on offensive and defensive systems.

“We’ve got to keep working hard (every game). We picture every game like we’re playing Sheridan or another top team,” said fourth-year forward Jermaine Lightbody. “We need to continue our momentum and keep building good habits.”

Lightbody added that the team has good chemistry right now, and they’re having a lot of fun on and off the court.

With only three games remaining in the regular season, each game will only grow in importance moving forward.

“We’re trying to go 9-0 in the second half, so that’s important because we want to build to Nationals,” said Lightbody.

The CCAA National Basketball Championships will take place from Mar. 11 to 16 at Quest University in Squamish, B.C.

Hawks’ next scheduled game, a contest in Hamilton against Redeemer, is another hurdle on their way to a run at both the OCAA and National Championships.

“(Redeemer is) a physical team. They’re aggressive, and they’re physical on the glass,” said Hawks head coach Shawn Collins. “We have to take care of the rebounds on both ends of the floor, and execute in the offensive end. If we execute well in the offensive end and control the tempo and the rhythm of the game, I think we’ll be fine.”