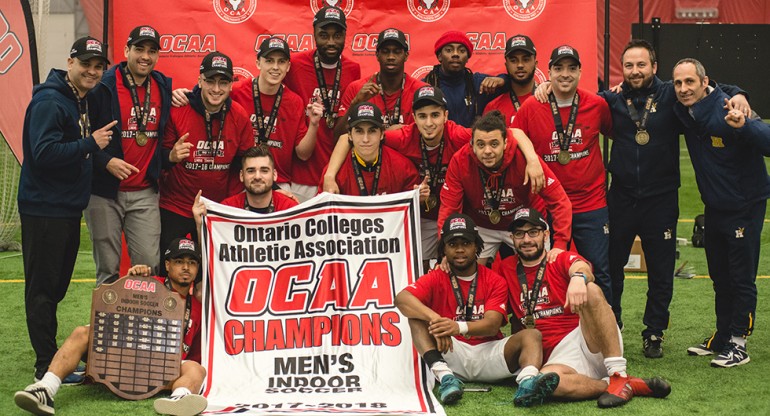 “We had a few injuries and due to the strike as well, we lost a few players as a result of that,” said coach Michael Aquino of the Humber men’s indoor soccer team.

“Guys who had given some thought to getting their money back due to programs that opted to restart next year and dropped out,” he said. “We were a little depleted, it wasn’t certain how far we would go and how well we would do.”

Defender Jamie Scott said both the leadership of the seniors and the heart of the younger players stepping in after losing a number of players after the five-week faculty strike helped them reach the championship.

“The core group of guys, the mains, the seniors, the guys that came back those guys really helped us really push through it because a lot of us were down,” Scott said. “We recruited some of the practice players to come up to the actual team, they played a big part of it as well.”

Co-coach Alex Sabatini said he never lost hope in winning the championship because he felt the team has always shown talent.

“For the indoor, we have very good players at the school. We know our group very well, we know our competition,” Sabatini said.

“For myself anyways, I always knew we had the belief to win the championship,” he said. “I never went into the indoor thinking we aren’t going to medal, I thought there was a very good chance that we could win.”

Sabatini said the Hawks are very good at recruiting championship teams and could see one in the men’s indoor soccer team.

“But even for indoor, some schools that are mediocre outdoor actually have decent indoor teams because it’s only five and a keeper, it’s only six a side,” Sabatini said.

“With a group of 10 players you could actually do quite well,” he said. “But our guys stepped up in right moments and we have very good individual players. We have good, quick, speedy players with great soccer IQ.

“With that I knew we had a team that could be very successful,” Sabatini said.

He has high hopes for his team next year and will hold open tryouts for those who aspire to be a part of the team.

“I think with our group we are one of the heavier hitters in the OCAA, I always think we will have an opportunity. We have a good opportunity going into next year, but we are looking to instill some core values to the players,” Sabatini said.

“From indoor resiliency is big, showed a lot of character, they showed perseverance, they were selfless and didn’t put themselves ahead of the team,” he said. “There is a lot of integrity in sportsmanship, a lot of those values that they exhibited in the indoor we are just looking to continue on to next year.”