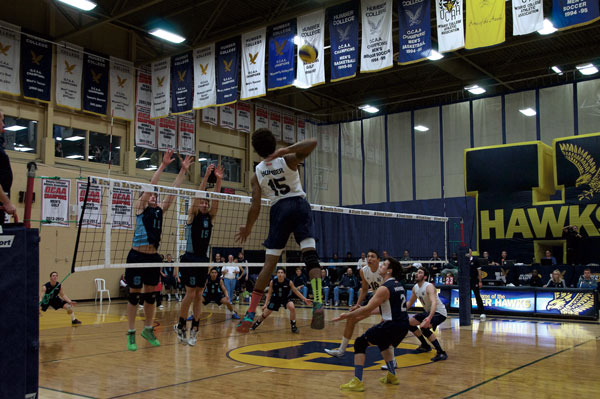 Christina Succi
Terrel Bramwell goes up for a spike against the Sheridan Bruins to put the Humber Hawks up 24-14 en route to a five-set victory on Jan. 22.

After a three game road trip, the Humber Hawks men’s volleyball team was back at home, giving their fans something to cheer about.

Hosting the Sheridan Bruins on Jan. 22, the Hawks downed the visitors in five sets on the strength of an outstanding performance from Terrel Bramwell.

Bramwell finished with 27 kills, a number in which no other player on the court even came close to.

“It feels pretty good, because I took a year and a half off and had ACL surgery in 2012, I was used to getting these numbers,” Bramwell said. “Coming back it’s been rough, so it was good get to get back up there and put up the numbers I really know I can.”

Sheridan took the first set and jumped to an early lead, but Humber answered with tweaks to its lineup. Trevor Wong stepped on the court and seemed to be a wall at the net.

After taking the second and third sets, the Hawks kept the pressure in the fourth, forcing the Bruins to call consecutive time-outs in an attempt to slow down the pace. The timeouts worked, the Bruins took the fourth set, before Humber stormed back to a five-set victory.

“It never should have gone that way, we had the lead and we let them back in the match,” said Hawks head coach Wayne Wilkins. “We played frazzled against a team that we should not ever have been frazzled against.”

“I thought they played outstanding,” he said. “We competed at a really high level. Every guy left it all out on the floor,” adding he was impressed with Humber’s presence near the net.

“[Humber’s] two big guys at the net had some big blocks, and when you block the ball in this game, it gives you huge momentum,”  said McAllister. “We got the swings with the right guys that we wanted, and in this game it comes down to execution we didn’t make errors, but they made plays.”

Those plays have helped Humber on their current ten-game winning streak, but Bramwell doesn’t feel that his, nor the Hawks, job is done quite yet.

“We’re ranked second in Canada, and losing to any Ontario team now would hurt us,” said Bramwell. “We’re trying to move up to number one and we have a lot of work to do, and we’re ready.”