It was a hard-fought game on Saturday Nov. 13, but Humber Hawks men’s basketball team fell to the Sheridan Bruins late last Saturday night.

The teams were tied after every quarter, with the Bruins pulling ahead by five points in the last frame.

Two Hawks notched personal bests in the 79-74 loss on home court. Forward C.J. Bennett, finished with a season high of 15 points, and Ancil Martin added a team high of 16 points just 30 minutes into the game.

Scarborough native Tyrone Dickson made his mark too, posting his second double-double of the season.

“Tyrone Dickson is incredible, he is one of the best players in the country,” said Hawks assistant coach James Depoe.

Despite moments of glory, Hawks head coach Patrick Au has concerns about the team.

“We need to do what we do better and work on poise and focus in our fourth quarter to be able to finish games strong,” said Au.

Humber shot a measly 2-20 from beyond the arch and a mediocre 35% from the field. Late game troubles were accentuated by hitting only one of 12 three’s and missing five free throws in the second half.

“Offensively we hit a low,” said Au. “We couldn’t get the balls to fall, it’s frustrating.”

Similarly, in the Hawks’ last game against Niagara, their offence fell completely off track in the fourth quarter.

However, when the Hawks fell down, the Bruins stood up. The CCAA’s third ranking Sheridan Bruins staged an aggressive offense beginning in the second quarter and got their team primed for a late game strike.

“We cannot just settle for three point shots, we have to get it to the rim,” said Depoe, “We need to get better in transition and focus on our transition.”

There isn’t reason to panic considering game three of a long season. Humber still has some time to clean up their offence. 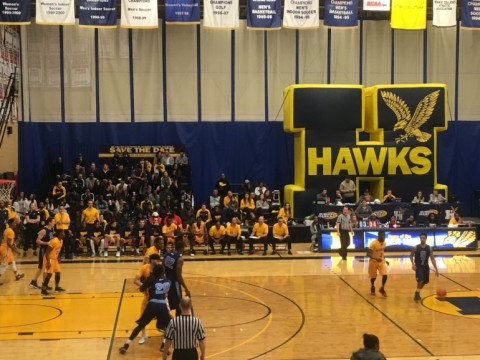 The next Hawks game will be at Sault College the weekend of Nov.19, as they face off against the Cougars and look to bounce back up over .500 with games Saturday and Sunday.