There are three things for certain: death, taxes and the rivalry between the Humber Hawks and the Sheridan Bruins.

The women’s soccer rivalry, in particular, can be intense.

The two juggernauts went head- to-head Wednesday Oct. 3 at Sheridan in Oakville, Ont., ending the regular season with the Hawks maintaining the Big O — no goals scored against them in 1,319 minutes of play so far this season. 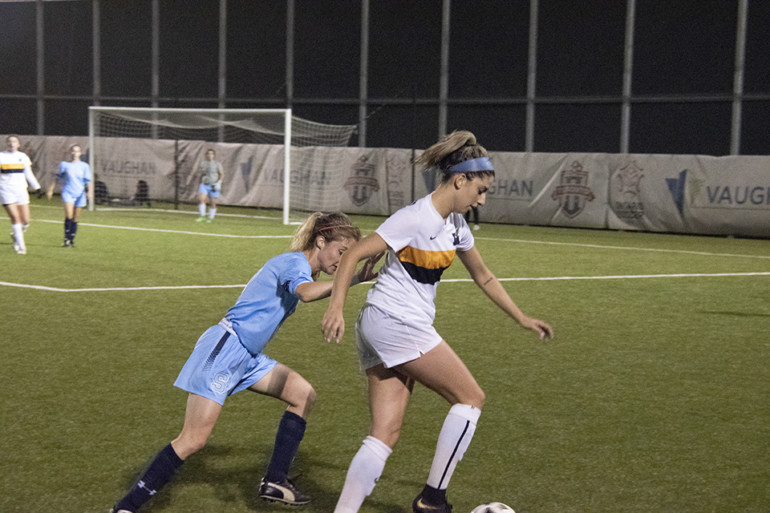 And they did in grand style declawing the Bruins 5-0 to take the college’s 16th OCAA division title.

But before the last regular season game at Sheridan’s Trafalgar campus, the Humber women’s team tamed the George Brown Huskies 4-0 on Oct. 12. The goal differential in Humber’s favour after that ninth game was 47 for, zero against.

The Hawks are now 52 for, zero against, beating its previous regular season high of 48 in 2000.

For those 10 games Humber’s women’s soccer team averaged 5.2 goals a game with 27.8 shots a game. They rightfully enjoy the fourth place ranking.

With goals from Stephanie Gutierrez, Nicole Lyon, Giulia Zanardi and Emily Tirabassi the Hawks were able to beat the Huskies 4-0.

That victory came nearly a week after the Hawks secured their seventh consecutive win over long-time rivals Sheridan Bruins which they won 2-0, followed with a 5-0 drubbing of Conestoga.

The Hawks and Bruins, however, have been known rivals for a long time now. They were both undefeated until facing each other.
Mauro Ongaro, co-head coach of the women’s soccer team, said they didn’t underestimate the Bruins before the Oct. 3 game and gave their 100 per cent. And it probably was the preparation the team needs as the post-season looms.

“They’re our rivals so we knew the game was going to be high tension and we expected that,” he said. “This is exactly what we needed at this time during the season.”

He said the win against Sheridan was good for the team’s morale and momentum and it gave the players a boost.

Leslie Fitzpatrick, head coach for the George Brown Huskies women’s soccer team, said he was aware of how tough Humber has been this year coming into the match.

“Humber has a great tradition and the results this year are a testament to their skill. They’re unbeaten and haven’t given up a goal,” she said.

Fitzpatrick says it would be a great achievement for any college to finish their regular season with a clean sheet.

Fans of the Hawks and the Huskies both agreed Humber has been dominant this season. 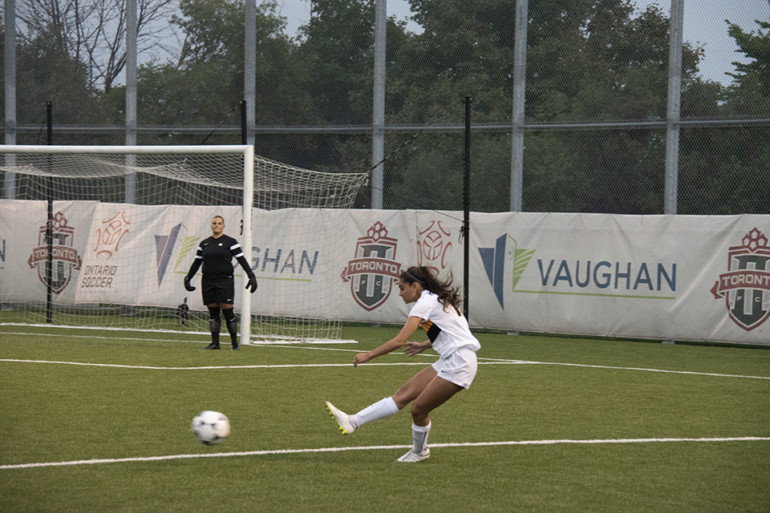 Humber defender Remi Pelletier clears the ball after getting the throw-in against the Sheridan Bruins.

“Humber’s a stronger team and the last game I watched George Brown, I thought they needed improvements to play against Humber,” said Phil Thomson, the father of Hawks’ defender Taylor.

He said that Hawks defeated the Huskies 9-0 in their previous match and he was confident on the Hawks victory.

Women’s head coach Vince Pileggi said the Hawks have a great ability to balance their stonewall defence with a high-powered offence.

“This is a very special group, we are very fortunate to have a lot of returning players to come back to the team this season,” he said. “We’ve been able to maintain a lot of possession of the ball during the game and knowing when to put the ball in the net.”

He added that the Hawks have also been doing really well in limiting the time on when the other team gets the chance to score.

Vanessa Fiore, the goalie responsible behind the Hawks’ clean sheet, said the teammates she has are strong both physically and mentally.

“We go in and play hard without worrying about stats. We have a strong core in our midfield and our defense is very strong so we go from there,” she said.
Fiore previously won player of the match for her stellar performance defending the Hawks’ net against the Bruins.

“While all of our six defenders play a key role for our success, (defender) Dominika Philip was one of our freshman athletes of the year,” Pileggi said.

He said forward Rebecca Spratt has seven goals, midfielder Giulia Zanardi has eight, and forward Zoe Longsworth, with six, has been always able to put the ball in the net.

Hawks centre mid-fielder Claudia Piazza said the Hawks are confident in their upcoming match against the Bruins.

“We are pretty confident right now being 9-0 with one game left and zero goals against us. Tuesday will be our toughest game this year,” she said. “They give us the best game every season every time we play.”

The Bruins, 8-1, recorded its only loss against Humber.

“They play more compact which makes it harder to score,” Piazza said.