As another year of college athletics kicks off at Humber College, the #HereToPlay campaign returns, going to bat for inclusivity in sports.

The campaign currently focuses on inclusion and hazing, while a mental health component is being developed.

It received the Innovator Award from the Canadian Collegiate Athletic Association last year after collaborating with the LGBTQ+ Resources Centre. 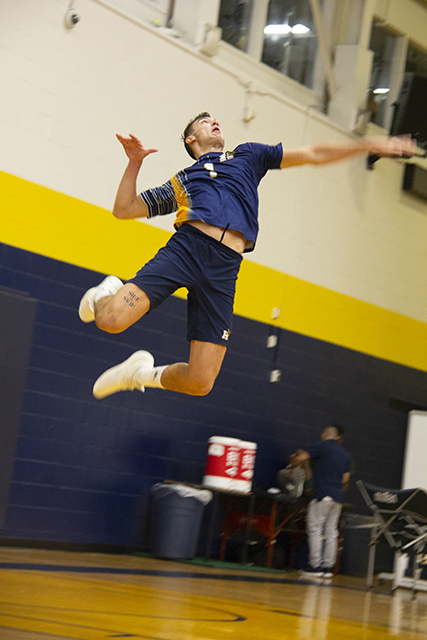 Humber varsity’s outside hitter, Dylan Devecseri, winds up to serve and score another point for his team. (Paige McGowan).

“We are trying to do anything we can to make people feel comfortable in their own skin in our gym. It doesn’t matter what someone’s colour, beliefs or preferences are,” Kopinak said.

“We want everyone here,” he said.

The campaign’s ultimate goal is to provide a safe and welcoming recreation and athletic community that allows everyone to have positive and respectful experiences while on campus.

All student-athletes and staff at Humber must complete bystander training to ensure they can react accordingly when someone is being made to feel unsafe at the gym. This policy is used to combat instances of harassment and sexual violence.

“We still have a lot to do and a long way to go, but we are definitely moving in the right direction,” Kopinak said.

Humber has been promoting #HereToPlay using multimedia, delivering speeches at games, showing their support in the gym and encouraging other colleges to get involved.

Humber’s softball team will even be providing rival team Conestoga with #HereToPlay warmup shirts during the game on Oct. 10. The first 200 people to arrive will receive free T-shirts and pride flags will be handed out to fans.

“Inclusivity is the key to victory,” said Eddie Yu, a program support officer with the School of Hospitality, Recreation, and Tourism.

“I have had students tell me they never use to come to the athletic centre until now,” he said. “The campaign is really making a difference and it makes me so happy to see.”