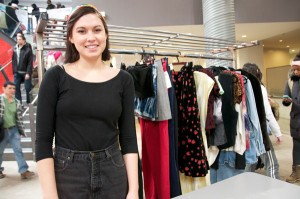 Humber students are getting into the entrepreneurial spirit by showcasing their businesses at the HSF-hosted Student Marketplace.

The most recent instalment of the federation’s biannual event took place on Jan. 30 at the North campus and Jan. 29 at Lakeshore.

The event lets students sell their merchandise on campus and has been occurring for the past six years.

Kay Tracey, HSF VP of student affairs-north, said the idea behind the event is to help students with their businesses.

“We realized there’s a lot of students with potential who needed a helping hand to start their own business, and giving them somewhere to showcase to other students whatever their passions are, we thought it would be a good idea,” she said.

About half a dozen students set up booths at North campus from 11 a.m. to 4 p.m.

Maya Lyn, a first-year fashion arts student, had a clothes booth complete with a rack showcasing, among other things, a faux-fur coat and a jean jacket.

“It’s all vintage clothes,” she said. “I’ve been collecting vintage forever, so I have an online store on Etsy (called) Lady Luna Vintage, and then I’ve just been doing local flea markets and when the school has markets I set up,” she said.

Next to her, Andrew Briggs, a first-year event planning student, sat with his business partner Jeremy Hocke in front of their handmade jewelry.

Briggs said he started making jewelry two years ago as a hobby, and it blossomed from there.

“We kind of amalgamated skill sets, started producing it more on a business level,” said Briggs of the partnership with Hocke.

Hocke, who is not a Humber student, used to work in computer diagnostic and repair, which he said is like making jewelry.

As for student response, Tracey was enthusiastic.

“A lot of students have enjoyed coming out to it, because it’s students supporting students,” Tracey said.

Lyn agreed the volume of students has been great for exposure and sales.

“I actually love it. The first one (last semester) was really successful, there’s just so much traffic that you don’t have to worry about it being dead, there’s always so many people and everyone’s curious, so it’s really good,” she said.

Jonathan Ponce, a second-year architectural technologies student, browsed through the booths and enjoyed the marketplace.

According to Tracey, an added benefit is the potential exposure the event gives to students.

“You never know, someone could be passing and be like, ‘Yeah! That’s a good idea!’ And then word gets around and they could know someone who knows someone that could help you,” she said.