Humber became the first public college in Canada to sign an international charter to promote health and sustainability on campus this week.

The Okanagan Charter is a charter for colleges and universities crafted in 2015 at the International Conference on Health Promoting Universities and Colleges in British Columbia, with representatives from 45 countries taking part. 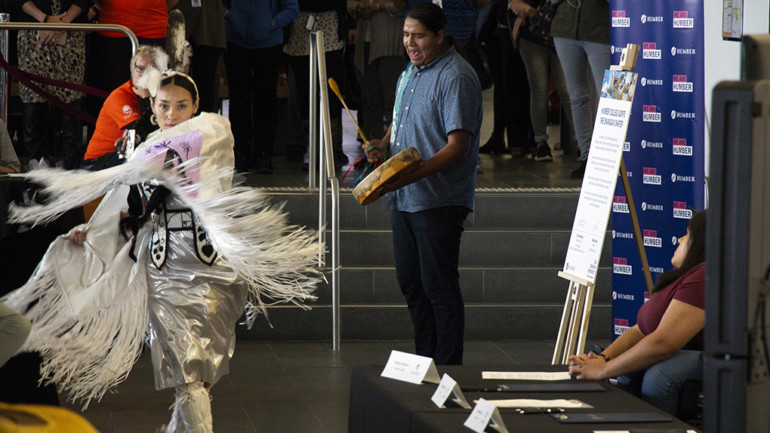 Students attending the event were positive about the charter signing.

“I’m really proud that the college has signed onto the Okanagan charter,” Nina Paul, a multimedia design and development student said. “It shows a lot of initiative in Humber being the first college to do so. It’s fantastic and shows their commitment to take care of not only students but staff and supporting staff.”

“We understand that by creating a diverse and healthy community, where well-being is a priority, we can have a profound effect on the achievement and engagement of our students and staff,” he said.

The 2015 Okanagan Charter has two specific calls to action, where post-secondary institutions embed health into all aspects of campus culture and to promote health.

Health promotion involves an approach that goes beyond individuals to enhance health across organizations and systems, and dealing with broad issues that deter good health, such as equity and social justice, linking people and the global environment.

Dean of Students Jen McMillen said that determining what Humber’s priorities are will require help from the community.“It could be around financial support, food security, housing security, it could be around all of those things,” she said.

The Charter doesn’t have set plans, targets or goals for post-secondary institutions to meet. McMillen said that was a good thing for Humber.

“It doesn’t specify exact metrics we need to live up to and again that’s something we like about it,” she said. “What we’re looking to do is engage the community in the conversation about what is a healthy inclusive community and then we need to figure out how we measure that.”

McMillen said there was one metric of success that had already come up in conversation.

“We want to have an increased number of students feel like somebody at Humber cares about them and their success,” McMillen said.

Muhammad Qasim, in the Accounting program, said he liked the idea that student well-being would be taken into consideration in all of Humber’s future decision.

“I believe that is definitely a ray of hope for any community,” he said.

The University of Guelph signed the Okanagan Charter last year, along with McMaster University and King’s College at Western University.