Students who take transit to the North campus soon won’t have to dart across Humber College Blvd. to get to class.

Part of the Learning Resource Commons project is a bus loop being constructed adjacent to Arboretum Drive.

All of the buses that serve Humber will use the bus loop, so buses now stopping on Humber College Blvd. will soon come into the campus to drop-off students.

“Eighty-five per cent of our population is taking transit,” said Carol Anderson, senior director of strategic asset management at Humber. “We weren’t serving them well when we were dumping them off on Humber College Blvd. and making them walk the furthest.

“We’ve had incidents in the cross walk and when it’s dark out, it’s not a pretty place.”

“Having a bus stop on campus would be better, especially in the winter,” she said.

“I’m not suggesting for a minute it’s going to be easy,” said Anderson, noting that bringing buses onto the campus will cause additional congestion.

Rob Kilfoyle, Humber’s director of Public Safety, said buses will come in the entrance controlled by traffic lights on Silver Bell Line and enter the bus loop from there.

Most buses will circle back around the loop and exit the campus on Silver Bell Line as well, he said. These buses will use the far side of the loop, closest to the University of Guelph-Humber. 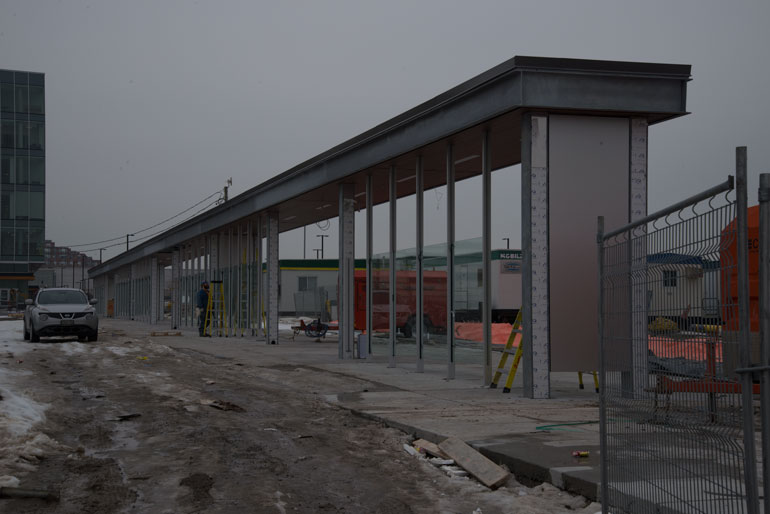 Buses following this path will be the ones that come most frequently. This includes all TTC buses, Brampton Transit and MiWay, he said.

Other buses will use the exit on Arboretum Drive, next to Lot 5. These buses will utilize the other side of the loop, and service the campus less frequently. This includes Viva and GO Transit, said Kilfoyle.

“Transit authorities wanted [Silver Bell Line] to just be entrance B for buses,” said Anderson. “We just won’t accept it being a priority bus lane.”

Silver Bell Line will be widened and a new signal system will be implemented at the intersection to accommodate both bus and vehicle traffic Anderson said.

“If there is a wait of a bus sitting at the intersection it’s going to make that signal change faster than being on the regular sequence,” said Anderson. This will help vehicle traffic around campus as well, she said.

She said widening the entrances to the college at certain points will also occur as part of preparation for the bus loop.

The amount of room buses need to turn was taken into consideration when designing the loop, said Kilfoyle.

“We did it with all their specs, they were engaged and that’s how the design of the bus loop came together,” he said.

The Queen’s Plate shuttle from the excess parking area near Woodbine Centre will not use the new bus loop. The service will continue to drop students off on Spruce Vista, the main road in the college, said Kilfoyle.

“There will be no problem in having it up and running for the fall semester,” said Anderson. The loop will be completed by the end of June, and then the transit authorities will begin training their drivers shortly after, she said.