Humber is offering the highest number of degree programs of any college in Ontario, and many students are wondering whether the institution will begin the long process to becoming a university.

Humber President Chris Whitaker said he’s been asked that question many times since taking office in 2012.

Each time, his response is always the same.

“The notion of a university as we currently understand it in Ontario is not an institution that we aspire to become,” said Whitaker. “At the same time, what Humber aspires to is what we call a polytechnic model of education.”

His answer echoes strategic plan set out in 2013 by Humber, now formally known as Humber College Institute of Technology and Learning, a polytechnic designation. It outlines three pillars, the first of which is “strengthening our polytechnic identity.”

“This vision of leadership in polytechnic education as we’ve defined it at Humber means staying true to the original college mission and mandate of providing access to opportunities for learning for students that want post-secondary education,” said Whitaker. “And so, by providing that broad range of credentials and programs within that, we’re just offering more choice to students.”

A quirk in the system is that the province doesn’t recognize the term polytechnic, which begs the question of what the term means

Ken Coates has worked in university administration since 1991 and co-authored the book Campus Confidential, which exposed some harsh realities about Canada’s universities.

Coates penned a column in The Globe and Mail entitled “This is Canada’s polytechnic moment,” which attempted to spark a discussion on polytechnic institutions.

In Ontario, polytechnics go by a different name.

“The government of Ontario does not officially designate ‘polytechnics’, in part because the term is not used consistently across jurisdictions,” the Ministry of Training, Colleges, and Universities said in an emailed statement.

“Ontario does not have any publicly-assisted institutions that use the designation ‘polytechnic’, nor does the Ministry have any formal criteria for what constitutes a ‘polytechnic’ institution.”

Instead, the Ministry has chosen to differentiate five colleges as Institutes of Technology and Advanced Learning or ITALs. The institutions can offer up to 15 per cent of their programming as applied degrees.

Of the five designated ITALs, only three of them – Sheridan, Conestoga and Humber – adopted the ITAL name. The other two, Seneca and George Brown, adopted the model in terms of being able to offer a certain percentage of applied degree programming, but opted not to change their names.

But what’s in a name?

Polytechnics Canada President Nobina Robinson argues calling an institution a polytechnic is a crucial aspect of its definition.

“The public doesn’t know what an ITAL is – it’s a large community college that has the power to offer degrees. And Humber has been one of the first to be an ITAL,” said Robinson.

“So, in my mind, Humber is a polytechnic. It’s just that the government hasn’t allowed it to brand itself that.”

Robinson says in driving this discussion Humber’s leadership is deeply rooted in its past.

“This is not something new to Chris Whitaker. Humber’s past two presidents – Robert Squee Gordon joined Polytechnics Canada and helped create it, John Davies was a member and became chair of Polytechnics Canada – they all instinctively understood that Humber’s not the same as (other colleges in the province), so how do you explain that difference?” said Robinson.

“You have to be careful when you use the word ‘difference’ to not put a value judgment against the other,” he said. 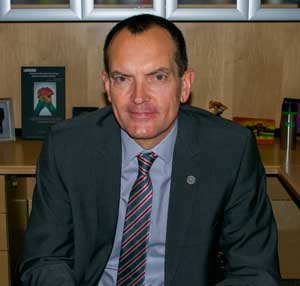 Humber College President and CEO Chris Whitaker said Humber has no plans to become a University in the way the term is understood.. Photo by Tamara Shade.

Discussions on differentiation have always been difficult for that very reason.

The Ministry attempted to tackle the topic with a series of round-table discussions in 2013, which culminated in a policy framework released in November of that year.

Robinson’s organization advocates for polytechnics at a federal level and leaves provincial advocacy to its members. In Ontario, that means that Humber has to go through its provincial association, Colleges Ontario, to advocate for change.

“Colleges Ontario is going to have a very hard time differentiating between its members.That differentiation is easy for me to do in Ottawa, but much harder to do in Toronto where the association has to equally represent all 24 entities,” she said.

For its part, Colleges Ontario is doing its best to address the needs of all its members.

“Although there is a great deal of commonality among missions of the 24 colleges, there is also considerable differentiation,” said Bill Summers, vice-president of Research and Policy, in an email.

“All colleges are committed to developing pathways amongst our diploma and degree programs so that graduates of diploma programs throughout the province have access to the aligned college degree programs,” he said.

Despite the ITAL designation, Robinson maintains Ontario needs to go a step further in creating an official polytechnic designation outside of the existing pillars of universities and colleges.

“If the word polytechnic is used, as it should be, (it’s) as a differentiator – we’re neither a university nor an old-fashioned community college,” she said.