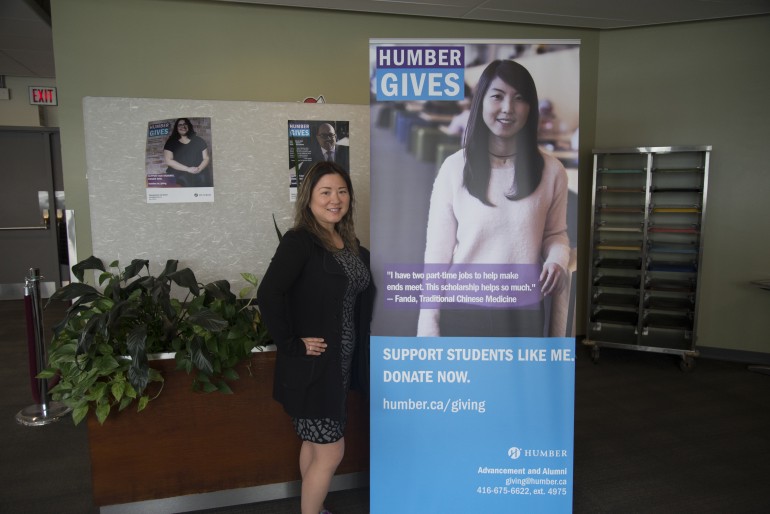 “Humber Gives is an annual internal fundraising campaign, where we are looking to support Humber’s initiative for raising money for the students and providing the financial assistance through scholarships and awards,” said Cynthia Luey, the annual giving officer with Humber’s Advancement and Alumni office.

“During Humber Gives campaign we are focused on reaching out to Humber staff and faculty,” she said.

Luey said donors on campus include President Chris Whitaker, deans and faculty members, “and we invite and encourage all Humber employees to get involved.”

Risha Toney, a former Humber student and a recruitment advisor with the college’s Office of the Registrar, said the importance of a donation on a student’s life gave her the inspiration to support the fundraising drive.

“My inspiration to support Humber Gives comes from the fact that I was a student here and I received scholarships and support from the college and this left a lasting impact on me,” she said.

“When I was a student, I always thought that one day I will be the one who will be giving back and when I had the ability to do so, that was when I started to provide the support to the students,” Toney said.

Linda Chao, associate director of International Recruitment and Market Development at Humber, said students are on their own after finishing high schools and many need a helping hand.

“Students have to earn money to pay for their tuition and rent,” she said. “I have been in Humber for last 13 years and I have witnessed a lot of (students) struggle, which is the reason I prefer the payroll deduction to give some money back to the students.”

Luey said donations toward scholarships and awards are open year-round.

“However, we have the campaign period, which happens every year for the certain duration and this year it will be on until the end of March,” she said.

“When we launch into a campaign mode, it’s basically to spread the awareness so that more people can make their contribution toward the student scholarships,” Luey said.