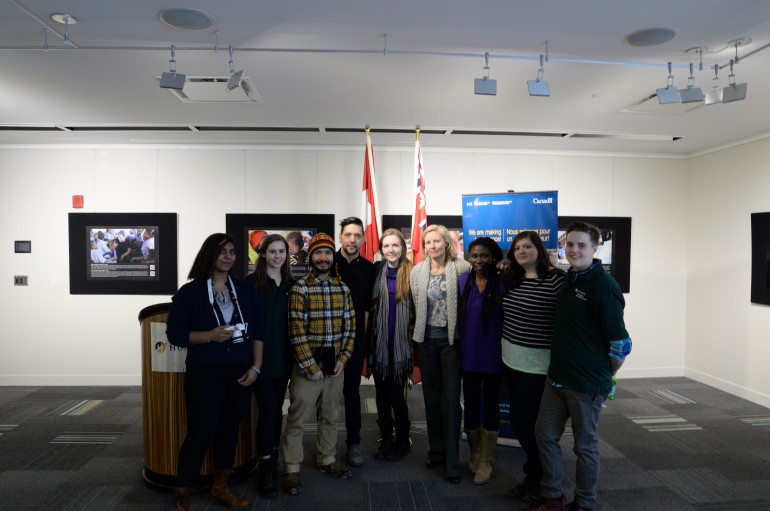 “We feed over 2 million people in West Africa affected by the Ebola outbreak, and six million in Syria,” Marshall said.

She works for the United Nation’s World Food Programme, also known as the WFP.

Marshall said that the WFP is one of the world’s largest humanitarian organizations, helping starving women and children in the world’s poorest nations.

“Canada is a global leader in supporting nutrition around the world,” said Marshall, during the photo exhibit at Humber.

The interactive element at the exhibition allows students and visitors to scan a QR code on some photographs.

WFP‘s Rein Skullerud was the photographer behind the photos displayed at the exhibit.

He captured women and children whose lives were saved by WFP’s efforts.

Marshall said students can scan the codes, complete a quiz, and feed a hunger child or women through one of WFP’s program.

For every quiz a student completes, a Canadian will donate money to WFP.

“I came up with the idea,” said Marshall.

She joined her agency with Humber’s International Development Week committee, because providing food to those in need, save lives.

Marshall said millions of people go to bed hungry every night, and WFP’s goal is to feed everyone or as much people as possible.

She joined the committee after attending a Carbon Footprint Workshop.

“When they opened it up to students and decided to have a student committee, that would be running International Development week, I wanted to be a part of it,” Oleka said.

She said sometimes people in Canada with access to food, take it for granted due to their privilege.

She wanted to get involved with Marshall’s through IDW’s event, raising awareness on the cause and helping other students to understand how world hunger affects all of us.

“We have high energy biscuits, they look like cookies, but they have all the nutrition that children need,” Marshall said.

She said there are feeding centres in Sierra Leone, where mothers bring malnourished children, and plead for help and advice.

“It’s my job as a human being, my duty, to be there for others,” Stroumboulopoulos said.

He helped distribute “Gift of Canada” products in Haiti after the devastating 2010 earthquake.

Marshall said getting the food to those in need and finding the funds to do so can be difficult.

She and IDW’s committee members have done their fair share to promote the event at Humber’s campuses.

The photos will remain posted at Lakeshore’s L Space Gallery until Feb. 12.

“We really make sure what we bring into this space is first and foremost relevant to Humber’s students,” said Tara Mazurk, the gallery’s curator.