Humber Hawks expected to take on best at curling Nationals 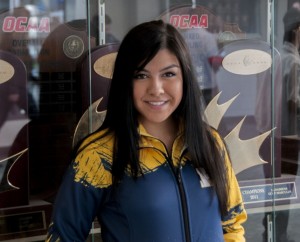 The Humber curling teams will be taking on Canada’s best as they head north for the CCAA national tournament.

Both the Hawks’ men’s and women’s team will be making the seven-hour trip to Sault Ste. Marie to participate in the CCAA national tournament from March 18 to 22. Second and fifth place provincial finishes for the men and women respectively paved the way for both teams earning a national berth.

Both teams have high expectations for nationals, but the women are especially hoping to improve on their fifth place finish at the OCAA tournament, which also took place in Sault Ste. Marie.

“I think at provincials we had really high expectations for ourselves,” said women’s skip Grace Esquega. “We just want to go out there and play like we can at nationals and hope for the best.”

The women felt they didn’t perform up to their full potential at provincials, said second Sarah Jagger.

“If we just concentrate more and have more focus than we had at provincials we can do well.”
The men also feel there is room for improvement despite winning a silver medal at the OCAA tournament in a tight 5-4 loss to Sault College on Feb. 22.

“After winning silver in provincials I think we want to go for the gold now,” said men’s second Shawn Watt. “Everyone is going to step up and work hard to get that gold medal.”

However, regardless of their high expectations and a national title on the line, neither team is feeling pressure as they prepare for nationals.

“I think there’s no real added pressure going into nationals,” Watt said. “Basically you see the same teams from provincials except you have the two or three out-of-town provinces. Coming in we always expect (the visiting schools) to have good teams but we’re going to give it 100 per cent in every game no matter who we’re playing.”

“I think we put so much pressure on ourselves at provincials and didn’t perform our best and now we’re going into nationals kind of as the underdog,” she said.

Both teams emphasized that keeping focused and playing as a team will be essential if they hope to contend for the national title.

“There was a little bit of a lack of focus at provincials I think. We just need to forget about everything that happened at provincials and just focus on nationals,” said Jagger. “Communication is definitely going to be key. It’s really important to be positive and keep everybody focused. Support is definitely a big thing in curling.

“I always put trust in my skip and I put trust in the calls he makes,” said Watt. “We always come together as a team on shot calls if the skip needs help, but ultimately the last call goes to the skip and we need to trust him in whatever shot he calls.”

Gold will be the focus for both the men’s and women’s teams moving forward. For Watt, who has been with the team since their inaugural season, a gold medal would be an amazing finish to his college curling career. Watt will graduate following the winter 2014 semester.

“This year at provincials winning a silver was a huge step forward for the team,” he said. “But since this will be my last tournament, getting the gold would mean more than anything to me.”