The Hawks men’s soccer team continued its undefeated start to the 2018 season with a commanding 4-1 victory over the Conestoga Condors on Wednesday.

It was the third win for the Hawks and since that game, the team posted its fourth win on Sept. 22, a 6-1 pasting of Cambrian Golden Shield. That makes Humber’s men’s soccer number one in Ontario, and fifth ranked nationally among colleges.

The Hawks started the game against the Condors with blistering pace and was nearly rewarded in the fifth minute when striker Luca Baldassarre fired a towering header off the uprights. The deadlock was eventually broken in the 39th minute when Humber’s midfielder Federico Leal lost two defenders with a shot fake and then launched an unstoppable strike to the back of the net, freezing Jacob Myers, the Condor’s helpless goalie. 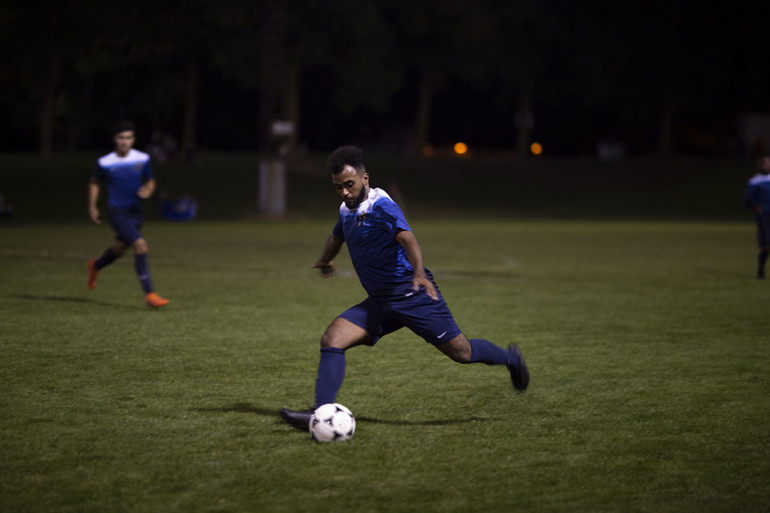 Conestoga started the game with most of their players within their own half, hoping to defend for most of the game and trying to catch the Hawks off guard with a counter-attack.

Hawks head coach Michael Aquino said they usually face teams that try to deny space and sit back and try to make the game difficult for the Hawks.

“For us, it’s a matter of moving the ball and trying to break that block down and continue to find ways that we can get in behind the block, get through the block and get over the block,” he said.

Hawks goalie Karman Singh agreed and is ready for whatever any opposing team has in mind.

“Having teams start out defensively and trying to clog up the middle is something we are seeing more often,” he said. “This is why we are spending more time in training practicing crosses so we can catch teams off-guard.”

The Hawks’ second goal followed the first by only four minutes. Striker Jaineil Hoilett netted his at the 43rd minute as Humber went into half-time with a comfortable two-goal lead.

Conestoga came out firing in the second half, catching the Hawks off guard. The Condors’ Zachariah Gingerich managed to sneak a goal back within the first five minutes of the second half.

Humber managed to keep its calm and took its game up another level by scoring two more goals in the second half — Baldassarre and Leal’s second — to secure a commanding 4-1win over the Condors.

“Honestly the only thing going through my mind when I had the ball at my feet and saw the goalie charging at me was how I can put the ball at the back of the net,” Hawks striker Baldassarre said.

He said despite the commanding win, the Hawks should remain both confident and humble after this performance.

“I told the guys not to look at the standings coming into the game because standings can be deceiving,” Baldassarre said. “These guys are a third-place team in the standings but play better than that in person. We shouldn’t underestimate teams.”

The Hawks are now on top of their division in the OCAA with four wins and zero losses.