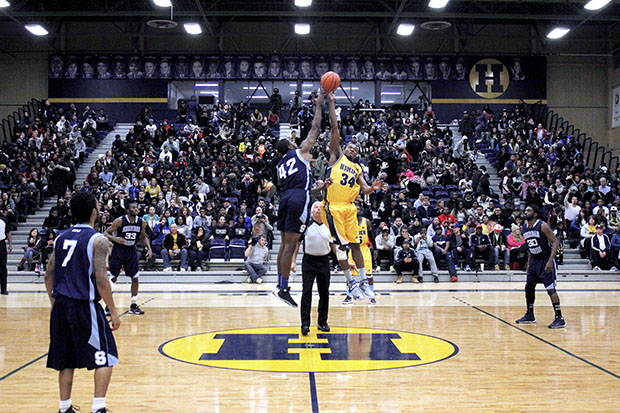 Humber and Sheridan tip-off in their most recent matchup. (Courtesy Humber Athletics)

The storied rivalry between the Humber Hawks and Sheridan Bruins men’s basketball teams has intensified once again after the Bruins repeated as OCAA champions on March 1.

For the second year in a row, Humber had to settle for less and watch their perennial rivals emerge as the top victor. The Hawks returned home with the bronze medal while the Bruins were able to secure the coveted gold medal as the tournament host.

Although Humber was able to cruise past the Seneca Sting in the quarterfinals with a 71-53 victory, they lost a tough match against the then-undefeated Algonquin Thunder in the semi-finals on Feb. 28.

The Bruins would go on to defeat the Thunder 76-75 in the championship game, while Humber had to settle for a 80-65 blowout victory over the Durham Lords in the bronze medal match.

The Hawks and Bruins have combined to win eight of the past 10 OCAA championships, with Humber taking gold five times versus Sheridan’s three titles. Since the OCAA tournament has passed, some members of the Hawks admitted that they found it very hard to see the Bruins win the gold.

“It’s tough,” said rookie guard Zachary Fox-Tapper, a marketing student at Humber. “It’s a team (the Bruins) we know we could’ve beaten if we got a chance to play them.”

“We’ve beaten them before, we know we’re the better team but it’s just how things turned out,” said Fox-Tapper. “They ended up winning on their home court.”

Dealing with the fact that Sheridan has won two straight championships is significant to veterans like Hawks power forward Brett Neumann, said Fox-Tapper.

“It’s definitely a tough experience, especially for Brett because Brett’s been here longer than most of us.”

Neumann is graduating from Humber, along with combo guard Brandon Sam-Hinton and centre Greg Edelsward.

These graduating players won’t be able to face the Bruins again, nor be able to compete for the OCAA championship again.

“The two games we had against them this year, they were both instant classics,” said Neumann, a fourth-year recreation and leisure student. “Other than us, I would call them the best team in Ontario.”

Both teams met in the regular season finale on Feb. 19 with Humber edging out the Bruins in a thriller 86-84 victory. The Hawks previously lost 73-72 to the Bruins on Nov. 19, 2014 after Bruins guard Trevor Williams made a buzzer beating three-pointer.

“(Neumann) has a deep hate for Sheridan as much as anybody,” said Fox-Tapper. “It just hurts to see his rival team to win both seasons and he’s not going to get another chance to go at them.”

“(Selkridge) put in a lot of work, he’s the heart of that team,” said Neumann. “(He) left it at all on the court and to see him win another one…it’s impressive.”

Aleena Domingo (of Hawks’ women’s team) admitted that she hates the Bruins. She was spotted at the men’s game on Feb. 19 and was passionately cheering on the Humber men’s team to the point where teammate Alyssa Carey had to hold her back several times.

Neumann said he expects more of the same from the rivalry even though he won’t be returning next season.

“It’s just a rivalry, it’s always gonna be there,” said Neumann. “You’re always going to see a thousand people in the crowd for every game.”

Fox-Tapper acknowledged that the next season’s rookies out of high school must adjust to the tougher competition and higher expectations.

“Just keep working hard, just try to contribute as much as possible through practices and games,” advised Fox-Tapper. “Focus on the goal to eventually win a gold medal.”