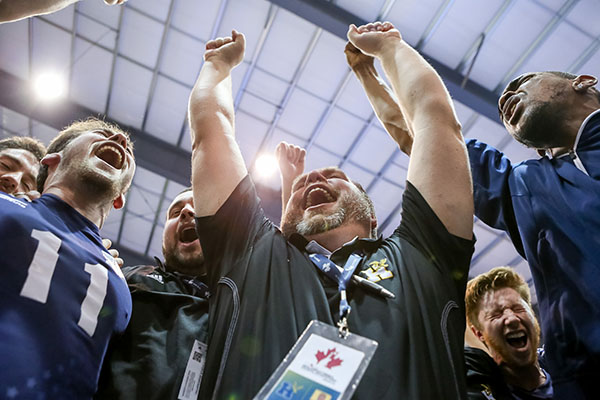 After dropping their first game in straight set to Columbia Bible College, the Hawks would get the last laugh by beating them for the bronze.

“Being the Ontario team to get into a medal game meant a lot for us and Ontario in general,” said Terrel Bramwell.

Being the second game in the same day for both teams, it was a battle of mental strength and physical exhaustion. It would be Humber who would outlast and outplay the competition. Huge swings from Bramwell and Kamyn Wilkins gave the Hawks an initial head-start and they held on to that momentum until they final point.

“We moved Kamyn to the left side, and put Terrel back on the right side, which we hadn’t done all year, but it added a different dimension,” said Wilkins.

Whether it was tweaks in the lineup, or a refusal to lose, it worked. The Hawks dominated and took the match three sets to one, clinching third place and national bronze. It’s not gold, but it’s still hardware. It wasn’t the only redemption Humber got during the tournament.

After surging past the Saint-Jerome Cheminots, a rematch was set between Humber and the team that defeated the Hawks for OCAA gold, the Mohawk Mountaineers.

No motivation was needed for this one; the Hawks were still steaming from their last meeting. “We always knew we were better than Mohawk, we took our foot off the pedal at OCs and they capitalized. So now at nationals was a chance for us to prove that, and we did,” said Wilkins.

“Getting to play Mohawk again was on our minds for a long time after provincials, so we were glad to play them in the semi’s to get to the bronze because we knew we were the better team,” said Bramwell.

The Hawks and the Mountaineers battled it out during a close five set match, with the Hawks ultimately coming out on top, 15-11 in the final set. Not only did Humber see sweet redemption from their provincial title heartbreak, but in winning they also advanced to the bronze medal game.

“Double redemption is sweet, but a national medal is sweeter,” said top hitter for the Hawks, Cameron Fletcher. “This season was very demanding physically and mentally, so it’s great to have some hardware to show for it.”

The Hawks showed it’s not how you start, but how you finish. Coming back from such an upsetting start is hard to bounce back from.

Head coach Wayne Wilkins said this team was not built for failure.

“We had to put the first game in the past and move forward because there was still the opportunity to show that we could prove that we’re the best team in Ontario.”

Wilkins said he couldn’t be more proud of the boys, “We won a bronze medal, but to say that we’re the third best in Canada, that speaks volumes.

“To go through the adversity we went through with injuries, and still finish that way, we know the program is in good hands,” said Wilkins.