The summer job fair has been occurring at Humber for five consecutive years. In 2009, the event had 18 employers, says Christine Colosimo, Humber career advisor. Last Tuesday’s event included over 45 employers.

Despite the growing number of employers, however, Statistics Canada shows the national unemployment rate of youths aged 15 to 24 was over 14 per cent in 2012.

Ken Graham, director of training and professional services at Adecco Canada, said the rate of unemployment is a global challenge. 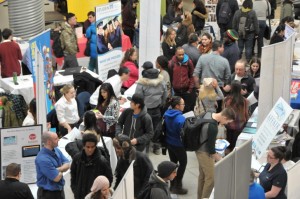 At over 10 per cent, Toronto’s youth unemployment rate is considerably higher than the national average jobless rate of 7.2 percent.

“It is a result of the most recent recession and the global financial crisis. This has definitely shocked these numbers up,” said Graham.

Loma Choksi, a first-year student in the computer-programming stream at Humber, attended the job fair for the first time in hopes of finding a summer job.

“It is difficult,” said Jay Goswami, a second-year Humber student in information technology. He returned to the summer job fair after unsuccessfully obtaining a job last year.

First time vendor and managing director at Affair Tent & Rentals, Chris MacLellan, said, “We are looking to hire approximately 30 students. The number of students we hire increases every year.”

Career advisor Colosimo believes networking is a huge factor when it comes to job hunting.

“That is key because you make an impact. I think the generation right now stuck in these unemployment statistics are the ones that tend to stay away from that human interaction,” he said.

Despite the odds, Colosimo sees hope for the future.
“I believe that if you do all the right things and have the right attitude, you’ll be successful…open up the box a little bit. Don’t be so short sighted. Try to find your own niche,” he said.

An additional job fair will be held tomorrow at Humber’s Lakeshore campus.