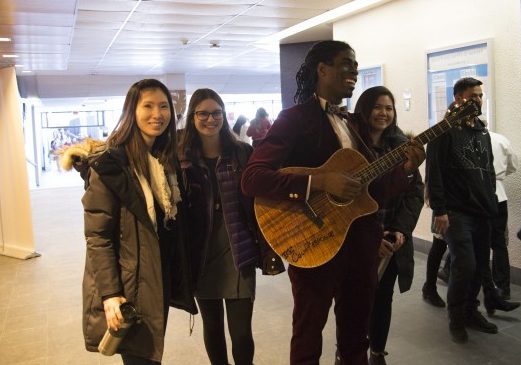 Valentine’s Day has been celebrated by many people around the world for more than a millennia, and the heart-filled holiday is usually marked by love stories being started, continued and shared.

Some of these stories come from people who are now happily married but were once college students when they met and fell in love.

Five years ago, the Humber and the University of Guelph-Humber Advancement and Alumni Centre located on the fifth floor of the Learning Resource Commons at Humber North launched a campaign known as Humber Love. It has been a tradition for former students to tell the community about their love stories on Feb. 14.

The Humber Love campaign had been done in different ways every year, either with interviews or a collage video.
Continuing with this Humber tradition, Karina Butzek-Morris, manager of Humber Alumni said the centre is “focusing on getting both stories and pictures of five couples to produce a video just in time” for Valentine’s Day.

“We have a list compiled of all the couples that we know of and that we’ve met with throughout the years,” Butzek-Morris said. “This year, we’ve reached out to eight couples. Three or four of them came from social media.”

She said the couples are chosen, they send her a written version of their story along with five or six pictures of their romance to her via email or social media.

Butzek-Morris and the rest of the team continued this tradition because they felt like these love stories needed to be told because the stories show the students have not just made it through school.

“Humber changed their lives personally as well,” she said.

“Not only were they successful in their career, Humber was also the place where they met their significant other.
“It’s a sweet side to the story, you know?” Butzek-Morris said.

Most of the feedback she gets from the couples or even from her own team is positive.

“The couples always think that the campaign is a fun way to share their stories with the Humber community,” she said. “There are many stories that we can share about grads being successful.”