Thirty-one administrative staff members met on March 26 to discuss inclusivity with the aim of discouraging Transphobia at Humber College.

“In English we have gender pronouns,” Cynthia Petersen, a Toronto-Based Lawyer at Sacks Goldblatt Mitchell LLP. “There are no gendered pronouns in Khmer.”

Khmer is the official language of Cambodia. Peterson said she was closely involved in Toronto’s Khmer community a few years ago when she had a Cambodian partner.

Peterson said in the Transgender community, an individual prefers to be referred to as “they” or “them” instead of “his or her,” they do not want to be categorized under societal gender norms.

Al Scheim’s and Western University’s Associate Professor Greta Bauer’s conducted a respondent-based survey sample in The Journal of Sex Research. Results showed that one in 200 people in Ontario, identify as Transgender.

Petersen was the main speaker at the conference. She is a well-known equal rights advocate in Canada’s lesbians, gays, bisexuals and transsexual community.

Petersen said Humber’s staff members have a responsibility to prevent anti-trans harassment and discrimination on campus.

Transphobia is defined as fear or discrimination against people who do not identify with normative, gender binaries in society.

“Often people act out of ignorance and not out of malice,” said Petersen. “We are embedded in the culture, in which we’ve been raised.”

According to Humber College’s Gender Diversity policy, students have the right to self-identify without discrimination.

“No person shall be asked or required to ‘prove’ their gender (by providing a doctor’s note, identity documents, etc.) in order to gain access to any facilities, activities, initiatives and opportunities.” 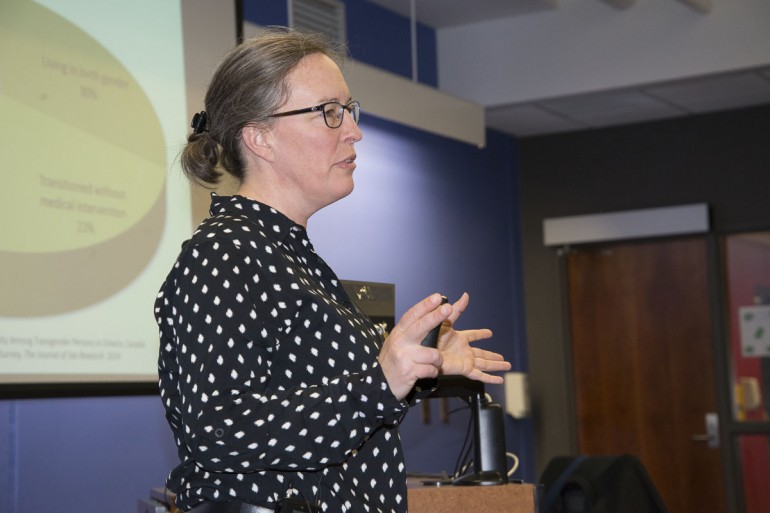 ynthia Petersen is known for her work as an equal rights activists. She spoke at a faculty conference at Humber College to promote inclusivity for transsexual students.

All-Gender washrooms in an aim to reduce social stigma.

“Basically, the whole idea behind it is to raise awareness for people,” said Maureen Carnegie, Co-Chair of Humber’s Gender and Sexual Diversity Committee. “In this day and age, we live in a time where we need to be more accepting of people who are Trans and Gender-Variant.”

Recently, the University of Bristol posted social media campaign on All-Gender bathrooms. “Don’t worry about it, they know better than you,” they wrote in their campaign.

Silcox-Child said their signs will have a similar message and will be up the Thursday after Good Friday.