Soft lighting shines down onto a wall of meticulously placed photos illuminating the talents of Humber College photography professor Erin Riley on her opening night at the Spadina campus of Alliance Française de Toronto.

The Virtue Street exhibit is simple but carries a strong impact. Riley’s project aims to expose a side of Toronto that goes largely unnoticed.

The show, which opened Jan. 14, runs until March 8 at the Spadina Road gallery north of Bloor Street. 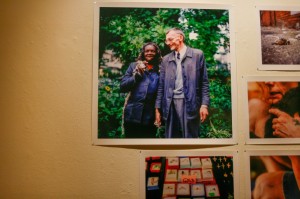 “A lot of the time you look at these people and may think they don’t necessarily live the best life, but it’s often not the case,” said Riley.

Chris Mason, a part-time photography teacher at Ryerson University, describes the exhibit as an assemblage of lives, “more like case studies of separate people. Then instead of having them as single projects, pulling them all together to make one big one – super interesting.”

For Riley, the project started about eight years ago as a way to get to know her new neighbourhood, near Virtue Street

“When you have the camera you can be nosy” she said. “I kind of ask and get into places that you just can’t go to without a reason.”

“As a work, it’s very powerful and it shows us a different Toronto than the one we are used to. It’s not glamorous, it’s real life and real people – but with a beautiful eye,” he said.

Within the six weeks of the exhibit, upwards of 2,000 people will have the opportunity to experience the world through Riley’s eyes.

“When you walk in here you will not go out the same way – you will see the street differently. We are happy not for us, but for Erin,” Lasserre said.

“When you see photos about Toronto you always see the CN Tower, not behind-the-scenes. It’s hard sometimes to look at the pictures, but at the same time there’s a lot of humanity,” cultural director of Alliance Française Patricia Guerin said.

Riley attributes her success to working with subjects that she loves.

“What you need to do is find things that really motivate you, things that you would love to spend years working on.”