The Hawks women’s basketball team capped off the first half of the season with another big win.

The Hawks defeated the Mohawk Mountaineers 89-64 Wednesday, improving upon their undefeated record to 9-0.

“We knew going in that it was gonna be a playoff-type atmosphere, a playoff-type physicality, it’s always that way when we play Mohawk,” said head coach Ajay Sharma, “We’ve played them the last two years in a row in the OCAA Championship, so we knew what to expect and I was happy with the way the girls responded.”

The Hawks controlled the game from the start, outscoring Mohawk in every quarter and not allowing Mohawk to score more than 18 points in each quarter.

Point guard Ceejay Nofuente led the way for the Hawks, recording 25 points, 16 assists and one rebound short of a triple double.

“I was just happy we got the win and happy to get my team involved,” said Nofuente.

“Ceejay, her stat line was ridiculous,” said Sharma. “She just fills it up across the board and she makes all of us better.”

The Hawks got key contributions from other players as well. Forward Aleena Domingo had 14 points and 10 rebounds, centre Jill Semple scored 18 points and three blocks and guard Amber Bechard had 13 points, and went .500 from beyond the arc.

“Amber defends the other teams’ best player, and can shoot the three for us and run the floor for us,” said Sharma. “We got a lot of things that we can throw at people and when they’re playing together and playing well, we’re tough.” 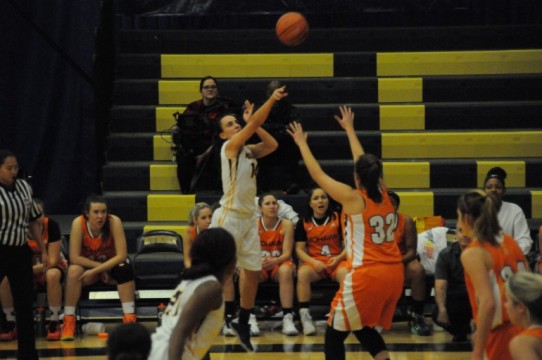 “It was a tough fought, physical game that was pretty well coached by both sides,” said assistant coach Kern Lewis. “Both teams gave great effort, and we just happened to pull away and seal the win.”

“They’re competing, they’re bringing their best game, they’re physical, and we just had to match it,” said Nofuente on the Mountaineers.

Luckily for both teams, the winter break allows for a few rest weeks, as the energy expenditure was high in this mid-season thriller.

The Hawks now go on a five week break, with their next game being Jan. 11 against the Redeemer Royals.

“I want to get more consistent with my shot,” said Nofuente on what her expectations were for the second half of the season. “My team, just getting better every day on the court and off, just getting stronger.”

“Just continue to get better day by day, in practice just continue to grind, to work on our weaknesses,” said Lewis. “And continue to have the same effort we had in the first semester and hopefully we end the season undefeated.”

Coach Sharma is humble about the team’s spotless record.

“We don’t really talk about what our record is, we’re more concerned about that possession in front of us and the one after that. And that goes for the ones in practice it’s not just about game possessions, it’s the ones in practice that are important,” said Sharma. “We don’t worry about wins and losses. It takes care of itself if you focus on the little details.”