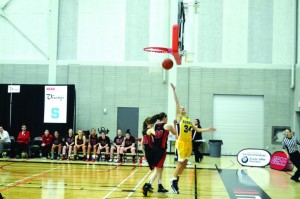 Humber’s Natalie Hagopian drives to the basket for a lay-in during OCAA tournament action. (Kheon Clarke)

The women’s basketball Humber Hawks fell short of their golden opportunity at the 2014 OCAA Championships at Mohawk College in Hamilton.

The Feb. 27 tournament appeared promising for the Hawks, as their first game saw them handily defeated the Sheridan Bruins 67-55.

In practicing before the game, Hawks head coach Ajay Sharma said they talked about getting out in transition and capitalizing on the Bruins mistakes for easy baskets.

“We talked about when they did miss we needed to push the ball because we felt we had an advantage running the floor,” Sharma said.

With their first win in the books, the Hawks advanced to a semi-final matchup against the rival Mohawk College Mountaineers.

At the half, the Hawks led 30-24, but Mohawk continued to press which lead Humber to commit 23 turnovers. As pressure mounted, the Mountaineers pulled away, beating the Hawk’s 65-43, effectively ending their championship run.

“We got our compete level up in the second half and once we got our momentum going we were able to carry it out through the rest of the game,” Mountaineers head coach Kevin Duffy said.

Sharma says Mohawk’s full court pressure defense caused some fatigue for Humber in the second half.

“When your mind starts to go and your legs go and you’re really challenged to make the right plays and calls didn’t go our way, it just created a hole we weren’t able to climb out of.”

The Hawks committed 26 turnovers in the game, dropping the game, and their last chance at a medal, 55-49.
Remy Simpson, head coach of the St. Lawrence College women’s basketball team, said the Hawks are a bigger and more physical team so rebounding was key.

“We knew we were gonna have to do a good job on the glass. In the first half we didn’t do a good job but we cleaned things up and applied pressure and it resulted in the win,” Simpson says.

Following the loss to St. Lawrence, Sharma could not be reached for comments.

Now a decade since the Hawks began a three-year run of medals – two bronze, one gold – the Hawks have failed to medal in seven of the past eight OCAA Championships.