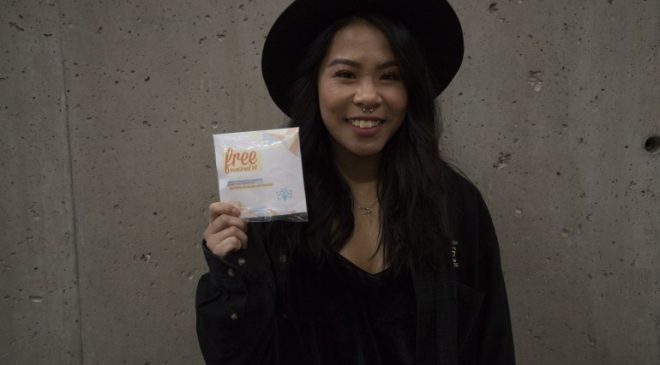 The person behind this initiative is Lakeshore IGNITE Vice President Allisa Lim, whose platform during elections was the promise of free menstrual kits. After two semesters spent campaigning, she’s happy to see her project finally realized.

“I wanted to make sure that students aren’t having to stress about finances when it comes to purchasing these products,” Lim said. “This is a security blanket when you’re on campus. If you’ve forgotten a pad or tampon, we’re able to help supply those to you.”

A big part of this project is about eliminating the stigma surrounding menstruation, Lim said. IGNITE wants to utilize the kits to start a conversation, as well as provide free products to those in need, she said.

“I think we’re living in the time of breaking walls,” Lim said. “And this is just one project that’s trying to break one wall. I want future generations to understand that women who are menstruating, or even a person who’s menstruating, is normal. It shouldn’t be disgusting.”

Lim credits her transgender brother as being an influencer behind her pursuit of this initiative.

“This project is trying to increase the conversation of periods and decrease the stigma that it’s gross, or that only a female can do it,” Lim said. “A transgender person who’s female to male doesn’t have to identify themselves as female to menstruate. So this initiative is allowing that opportunity for all students across the board to have it.”

At the beginning of the project, Lim personally contacted tampon manufacturer Procter & Gamble and received 4,000 free products. It was small milestones like this that led to the initiative finally being launched, Lim said.

There were some minor obstacles that Lim had to face in bringing this project forward, largely due to the kits being displayed in public spaces.

“I think people were scared that students were going to be uncomfortable having these products around,” Lim said.

“And maybe people would end up stealing them because they’re all free. But to me, those things didn’t matter.

“If a student had to take more than 10, I’d let them because you never know their story,” she said. “Maybe they’re struggling with finances or maybe they don’t have the resources to purchase those themselves.”

The free kits are available at the North and Lakeshore campuses in their respective Health Centres, LGBTG+ Centres, and IGNITE offices. They can also be found in room 108 at Guelph Humber.

Each kit includes two tampons and two pads, both regular size. The packaging also features a survey link which Lim encourages everyone to fill out in order to make this pilot project permanent. The survey is open until the end of the semester on May 1.

Since being launched in January, Lim said they’ve received largely positive feedback from the survey. About 166 people have filled it out already with about 95 per cent of students saying they love the kits. Some commented they wished the packaging were more discrete or that they wished the kits were available in a different area.

Solest Waterman, a first-year law clerk student at Humber, thought the free kits were a great idea.
“They’re pretty handy,” Waterman said. “Those dispensers in the bathroom are unreliable. Sometimes nothing comes out.”

Both Waterman and Green agreed that an improvemens to the project would be placing the kits in different locations, such as in the bathrooms.

All feedback from the online survey goes towards making the project better. Lim hopes to see her initiative become permanent and add more products, like deodorant and razors.

With IGNITE elections coming up, she also encourages everyone to see the passion behind the candidate’s projects.

“If you support their projects, they’re able to do it,” Lim said. “I got so much support for this project when I was running, and that’s what made me really want to complete it.”