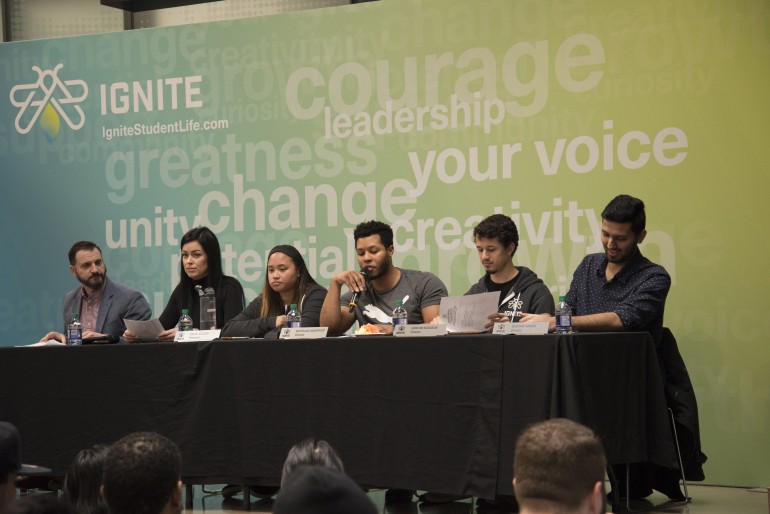 Humber College students once again voted on a budget proposal lacking in detail at this year’s Annual General Meeting.

IGNITE, Humber’s student association, draws up an operating budget each spring with a colourful infographic to explain how the revenue the organization receives from student fees will be used in the upcoming year.

And every March, the operating budget for the upcoming fiscal year is proposed to students at the organization’s AGM after IGNITE consults with those who were present can question student government officials about the budget and vote on it.

IGNITE’s operating budget is more than $11.13 million, based on a projected student population of about 32,000.

“The IGNITE revenue comes primarily from student fees, so we take the responsibility very seriously and ensure that these revenues are invested back into student lives while we’re making this budget,” said Tara DeFrancesco, IGNITE Financial Director, at this year’s AGM.

IGNITE’s budget once again provided a broad overview of expenses that can be found on the organization’s website alongside yearly financial statements and auditor’s reports, and minutes from IGNITE board meetings that provide more detail about the organization’s fiscal performance.

But the operating budget breaking down the organization’s expenses consistently lacks the detail of budgets publicized by other Ontario universities and colleges.

The difference between Ontario post-secondary school operating budgets can be seen in the specificity of its budget lines. IGNITE presents broad categories such as $1.68 million for IGNITE full-time and part-time staffing, $617,000 going towards promotions and events or $45,000 going towards student advocacy.

Student associations like the University of Toronto Students’ Union, York Federation of Students and George Brown College Student Association publicize operating budgets to their students that are longer than IGNITE’s single-page infographic, but include more detailed budget lines to explain why they need student fees and how that money is used.

Compared to IGNITE having a single budget line for staffing, the York Federation of Students provides totals for each individual elected executive member’s stipend.

IGNITE’s outgoing President Maja Jocson said information about how IGNITE arrives at the figures or where the money within these budget lines goes to, is available to students if they speak with IGNITE executive and staff, or attend the public Board of Directors meetings.

“The biggest thing is the AGM, but we don’t stop there. What we do is on our budget, you are able to access it. It’s not a secret” Jocson said.

“But again, only a certain number of students do that and if we put those lines here, (the budget) is going to be way too long,” Jocson said.

Students can comb financial statements from past years online, but a more thorough budget is not available on IGNITE’s website.

IGNITE’s largest expenditures outlined in next year’s budget include $6.69 million for services, which includes the flexible health and dental insurance plan, bursaries, financial relief and staffing, and $1.94 million for its administration costs, which mostly covers full-time and part-time staff.
Jocson said most of the high-level discussion surrounding formulating an operating budget happens at the Board of Director level.

She said the more concise and general infographic approach to an operating budget is for the sake of engaging all students, regardless of their academic field of study.

“People who are very interested in specific budget lines, then they want that type of visual where it’s a spreadsheet with pages on pages and numbers on numbers,” Jocson said. “There’s only a couple of students with a business or financial background.

“The majority of students might not understand this,” she said. “Our Annual General Meeting only comes once a year, so when you see (a budget) like that, it might deter students from coming.”