Memories of a personal struggle echoed across the Entrepreneurship Hall at Humber’s Lakeshore Campus on Sept. 29 as mental health speaker Mike Stroh shared his experiences with anxiety.

He took pauses, searching for ways to translate a lifelong battle into words.

Through a recollection of events, Stroh spent the first few hours of the Jack Summit discussing the social issue on a relatable level. As people listened, they were also learning about steps to channel their own afflictions into ways of advocating for mental health.

Jack.org, — a non-profit organization dedicated to youth mental health — partnered with Humber College in hosting the Jack Summit for the Etobicoke community. The event invited students and advocates to go deeper into social issues that are affecting many across Canada.

During Stroh’s speech, the audience was given a chance to tell their own stories. Instead of asking for advice, guests used their moments to let people know they weren’t alone.

The five-hour summit featured presentations and workshops for attendees and covered mental health at a location that worked to treat it for decades.

Humber’s facilities evolved from the former Lakeshore Psychiatric Hospital, with its message of wellness carrying over to students under personal and academic stress.

To Stroh, the use of substances and accessible remedies are also growing issues that make conditions worse.

“I thought my problems were tied up in some sort of ‘desire’ or unhealthy way of looking at myself,” Stroh said.

He said he realized his own struggles growing up were rooted from mental health and addiction.

“When you see other people who are struggling, it’s so hard for most people to accept that something’s wrong. It is almost impossible in some cases, and there’s not much you can do” Stroh said.

Speakers Christine Hsu and Faye Bontje led an interactive workshop during the summit that touched on Stroh’s ideas by identifying mental health issues through symptoms. 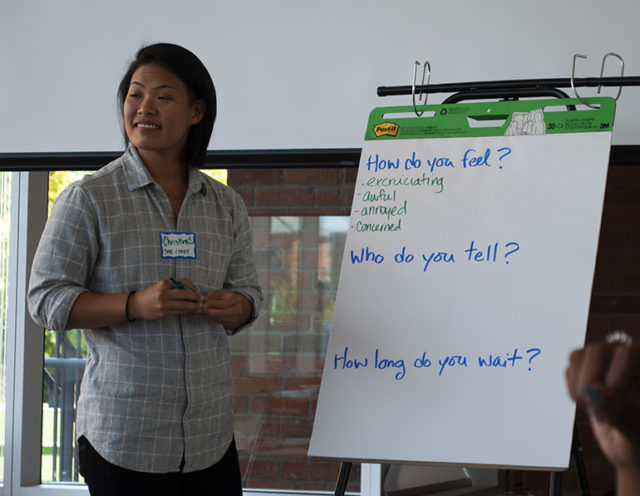 Using an ear ache as a metaphor, Bontje said talking about mental health should be as immediate as describing a physical pain to others.

“There is a shift. There is a change if we have a physical health problem,” said Bontje.

She said she believes there should be the same urgency to treat mental health.

Guests at the summit participated in team exercises, combining the same mental concepts with physical ones.

In an activity teaching connectedness, guests held hands together in a circle and lit up a ball by channeling their thoughts.

Another activity required people to approach a stranger across an open hall, breaking past a comfort zone of meeting someone new.

Jessica Regan, a speaker for mental health advocacy on social media, said the discussion is growing with significant interest from Millennials.

“It is such a bigger issue than we think it is, and it affects everyone differently and one thing I definitely noticed is how eager students are these days to engage in that conversation” said Regan

A younger generation could be setting new mental health policies in employment, she said.

“When we can start having the conversations from a Millennial standpoint or a Generation X standpoint, we’re going to be in those workforces creating those policies that are going to change people’s lives,” Regan said.