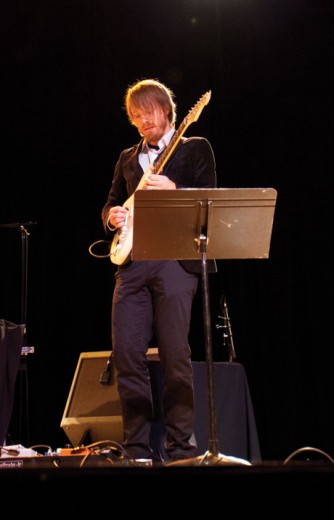 Jon Shearsmith is in his fourth year of Humber’s Bachelor of Music Program and is seen performing guitar as part of Ravi Naimpally’s World Jazz Ensemble. Taken by Kate Richards.

The world jazz ensembles offered by the music department allow students who have a foundation in traditional jazz to explore the music of other cultures, explained Denny Christianson, Humber’s Director of Music.

“The results are absolutely spellbinding,” he said, “It gives them a chance to explore new ways of expressing themselves.”

“It’s nice to be in touch with this generation and to see what music they’re into,” said Naimpally. He enjoys introducing his students to music that he’s familiar with as well.

“I try to bring an openness of different styles (of music) to the students,” he said.

Jon Shearsmith, 25, a guitarist in his fourth year of the Bachelor of Music program at Humber, said he wanted to try something new.

Naimpally’s Indo-jazz ensemble “seemed like something different than what I was normally used to,” he said.

The nine-member ensemble met outside school-scheduled practice time to perfect their sound, which allowed Shearsmith to play with other like-minded students.

He intends on exploring world jazz genres of music, he said.

“This opened a door for me into this other world that I want to explore,” he said.