Seeking a career in journalism today is not for the weak of heart.

Scott White, the editor-in-chief of Canadian Press spoke to students at Humber North campus last week, and his message was one of perseverance, adaptation and caution.

White’s first words were: “Who wants to be a journalist? What’s wrong with you?”

Journalism students were gathered at the Seventh Semester for the Jan. 22 talk presented by the Humber Students’ Federation as part of a CEO lunch-and-learn series.

White told them, “Tough times in the industry, tough times in many industries, but it’s always been tough in journalism.” 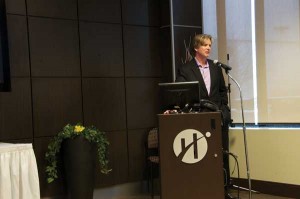 However, White also said the future for journalists is not completely grim, as long as they have some necessary skills.

“Being a team player, not having an ego get in the way. The most important thing is the story, not you. Obviously, an incredible work ethic, and a really strong bladder,” said White.

“You have to be able to do everything.”

White also discussed some things the Canadian Press, a wire service supplying news content to hundreds of newspapers in Canada and beyond, looks for when hiring journalists.

“In terms of trying to set yourself apart, you have to have work published,” he said. “Time and time again, the great equalizer for us is, shit happens, I need someone to go there and they were there before we even asked them.”

White said,  “I told my daughter, at the time she was working for the Toronto Star last election, I said ‘You better vote for Rob Ford.’ She said, ‘Why would I do that?’ I said, ‘Because I promise you this guy will be the greatest mayor for the Toronto Star and I was right.”

Asked his goal in addressing students, White said, “Just to talk about that it’s tough but the industry needs good people. And going at it with open eyes.”

Naomi Leanage, 21, a media studies student at University of Guelph-Humber, said,  “I thought it was definitely really informative, and kind of really opened my eyes to where my future is.”

“We’re holding these CEO lunch-and-learns, and we brought in someone last semester to speak with student entrepreneurs, and it was a fantastic event. They got to have a question-and-answer period with them,” he said.

“And so with Scott it’s the same idea… to share his message and his experience.”