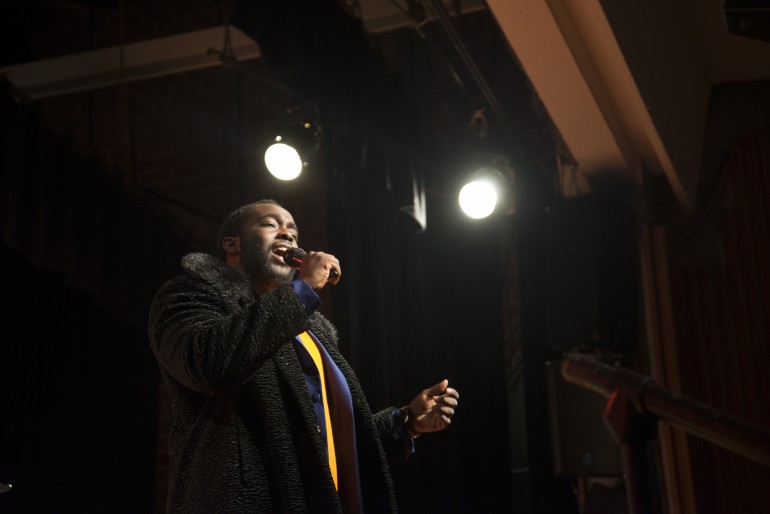 Nathan Frimpong putting on a solo act for the Humber R&B showcase.

Even a five-week college strike can’t stop the funk.

Performances featuring student musicians in Humber Lakeshore’s music program that were scheduled for last term but postponed because of the five-week faculty strike took centre stage on Feb. 23s.

Music instructors Mark Kelso and Will Jarvis led their respective student bands Groove Merchants and Rhythm’N Soul to put on an energetic show at the campus.

Students were mentored through a variety of practical musical experiences, allowing classes to become “living labs.”

“The group has really come along nicely,” Jarvis said. “With the strike and everything with the extra pressure being put on students due to that strike, they’ve really come through and given it all their energy.”

This year’s showcase was of particular importance to all involved because of the effects of last year’s Ontario college-wide strike that lasted five weeks. 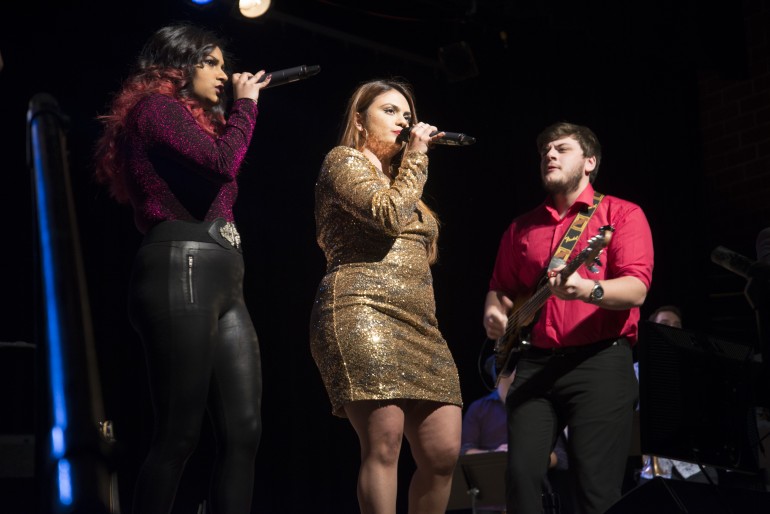 “Now we’re here and it’s still happening but I think music students got the worst end of it because everything is scheduled week by week in the entire semester,” Laferriere said. “A lot of people dropped out because they lost a lot of stuff.”

However, the ability to finally perform felt like a weight off students’ shoulders, said third-year vocal music student Nathan Frimpong.

The strike delayed the process of being able to perform earlier and created an extremely tight schedule with limited time to rehearse, he said.

The chance to finally put on a show was more important than just an academic level, Frimpong said.

Being able to prove not only to his peers who he spent the last frantic months with but to himself that he was capable of breaking out of his shell was personal, he said.

“To me, tonight’s showcase was finally an opportunity to break away from shyness because it makes a difference at the end of the day,” Frimpong said.

Having the showcase come together in spite of the college strike and execute an extraordinary performance demonstrated the ambitious vision of the School of Creative and Performing Arts, Jarvis said.

“The showcase gets better and better and we reach a higher level every time,” he said. “The students put more into it, the music is a little more difficult every year but we rise to the challenge every year.”