Psychologist Rosemary Barnes shared her decades of expertise on mental illness while a large screen above her showed pieces of art expressing vivid dreams had by Canadian artist and former psychiatric patient Susan Schellenberg.

Lakeshore campus hosted the art show Oct. 25 at the same place Schellenberg stayed at in 1969 when the college used to be the institution that treated her.

The two collaborated in 2008 with the book Committed to the Sane Asylum: Narratives to Mental Health and Well-Being to illustrate the quest to well-being of mind, soul and body.

The work explores patients’ afflictions through the power of art and how a combination of abstract characters and bleak, serene images help readers understand what the patients see.

Schellenberg’s current health concerns meant she had to promote the book from a distance through Vivian Moore, Humber’s Acting for Film and Television Instructor, who “channels” Schellenberg’s words.

Moore put all her focus in presenting for Schellenberg, 84, on her lifelong suffering with schizophrenia.

“I offer my story as a psychological portrait of emotional pain that doctors identified as a mental illness,” saidMoore, reading from Schellenberg upcoming book.

The presentation focused on a few of Schellenberg’s dreams, many of which she experienced while struggling to sleep with her illness. In one of them, a bishop emerges in darkness before it dissolves into a pile of dead leaves.

“The bishop’s leaves offered fertilizer to nourish my next stage of growth, and the difficult decisions to leave my marriage and religion,” she said.

In 1939, when Schellenberg was five, she started expressing her mental health by drawing in class. She channeled her creativity in order to escape from a tense environment growing up as the Second World War erupted.

“Close to VE Day [1945], I dreamed a marriage between two fish,” Schellenberg wrote. “The fish dressed in traditional human wedding attire, sailed off [towards their] honeymoon in a sea horse-drawn carriage.”

“My grade five teacher and mother, disturbed by the excellence of my fish composition, jointly concluded that despite my effort, a grade of 60 — rather than 100 per cent — would better serve the taming of my imagination, and good of my soul,” she said.

Barnes, co-author of the book with Schellenberg, said looking at afflictions from a “street level” is key to explaining remedies. Using postmodern ideas, Barnes said our reality has shaped our interactions around us.

“What we pay attention to, what we say and what we do: it shapes our sense of what reality is,” said Barnes. She said she believes there are more clues behind simply calling out a diagnosis.

“Then, you think about the next steps in a different way than if you say ‘okay, what gives this person the sense they’re living with an eye for delight- that they have the greatest wellbeing?’ That opens up a much broader set of possibilities in terms of what the next steps might be,” she said.

Schellenberg’s visions are painted and were on display at an on-campus gallery on the fourth floor of the Interpretive Centre at Lakeshore.

Standing at the end of the hall was a large mural of a nude dancer as a final showpiece, titled The Moore Gestures, which reflects mental complications in a form of dance. 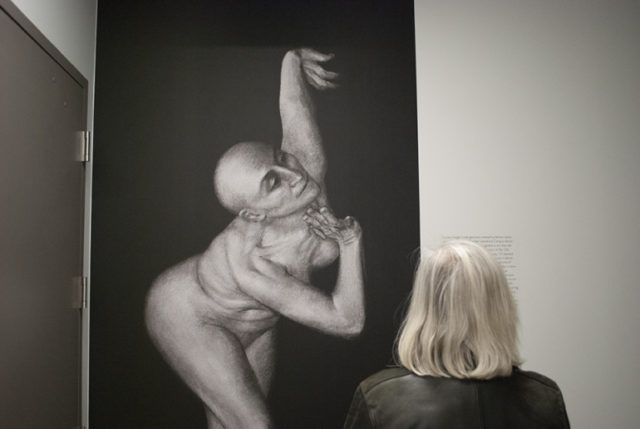 The subject in the painting is Vivian Moore. Speaking for Schellenberg at the event, the two share a personal connection, meeting “from the mid-1990s until 2003” for an art collaboration.

Moore said she danced in a studio while Schellenberg took photos and eight poses were chosen to be painted in black-and-white.

“It’s interesting because she took a picture, and then she drew a ‘resemblance’ of that picture,” Moore said.

“She’s very brave, especially in the 60’s. Now, we’re living in a different world. You really have to buck the system. She stood her ground and went her own route, and I value that,” she said.