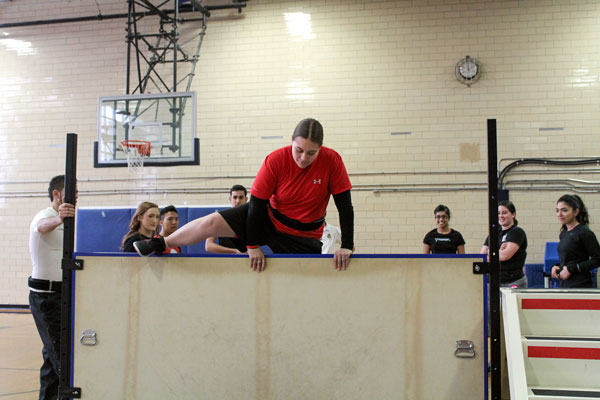 Photo by Travis Pereira
A Lakeshore student tackles a hurdle during the OPP training session.

Words of encouragement circulated the Lakeshore Fitness Centre as students struggled through a grueling, physical workout.

“Come on, you can do it. Push through, don’t quit,” yelled 21-year-old Matthew Pham, one of the 10 or so PFP students vying to get stronger while under the watchful eye of an Ontario Provincial Police recruiter.

The strenuous workout, known as a Practice Physical Readiness Evaluation, has been a part of the fitness routine for police hopefuls for nearly 14 years, said program coordinator Henri Berube.

“This is the first year that on top of doing it in class, we’re actually doing the practice PREP sessions. We’ve got a strategic partnership developed with an external partner,” Berube said.

Ontario Provincial Police recruitment officer Sgt. Elsa Gadsdon said this is the second semester the OPP has been officially offering a PREP for the program.

She said what impresses her most with the students is their dedication to helping out, adding several students participating in the sessions were in the gym before she even arrived, willing to voluntarily help in any way they could.

Pham said the program has strengthened his ability to perform the important roles of an officer, such as community involvement and offering moral support. He lives in the North York neighbourhood of Jane Street and Sheppard Avenue, and regularly helps out at community outreach events.

“As a police officer, if you say you want to serve and protect that means you have to get involved with the community, you have to know the people you’re dealing with,” Pham said.

Gadsdon said PREP is designed as an exercise at Humber, which simulates the exact physical requirements test used by the Ontario Association of Chiefs of Police. She said this is part of a standardized test used by police organizations in the province for assessing the eligibility of applicants, and PREP represents the physical capabilities portion. It focuses heavily on pursuit and restraint scenarios, and also includes a Shuttle Run, which monitors aerobic fitness.

Gadson said the official standard completion time for the pursuit/restraint circuit is less than two minutes 42 seconds, whereas the Shuttle Run is nearly eight minutes of consecutive running.

This was Pham’s third time doing the PREP and he said he’s seen noticeable improvement in his strength training each time.

“The first time I did it I got the bare minimum two minutes, 42 seconds. Today, I got two minutes, 30 seconds so I’m happy with those results,” said Pham.

Gadsdon said aside from the physical conditioning one of the major benefits for students is having valuable time to interact with a recruiter and prospective future employer.

“This gives them the opportunity to meet a recruiter at a critical stage in their life where they can learn how to make themselves more competitive while they’re undertaking their studies,” Gadsdon said.

Tresha Singh, 19, a second-year student, said she performed the PREP in gym class before, but this time it was different with the OPP recruiter present.

“In class, it’s just my gym teachers and the students in my program,” Singh said. “The arm resistance part was difficult. I need to work on my upper body strength, but I felt more motivated.”

Singh said after completing the program she plans on furthering her education by going to university for a bachelor’s degree in criminal justice.

“After that, I would like to work for customs, border or immigration,” Singh said.

The events coordinator for the Police Foundations Program Elizabeth Sheridan College is also a graduate of the program.

She said as a student it was clear the networking and resource building opportunities the program offered were invaluable, and now as a staff member she realizes creating these opportunities for students is an integral part of the program structure.

“We love to network,” Sheridan said. “We have lots of connections like the OPP and RCMP and we’re always working with different recruiters and they come in and meet with the students.”

Gadsdon said PREP is a great opportunity for students to test themselves and they should have no reservations about results being kept on file.

“We are here solely for the benefit of the students and the members of the public,” Gadsdon said. “We don’t keep records.”