A cold draft runs through a brightly lit tunnel underneath Humber’s Lakeshore campus. Large pipes hum loudly over the about 30 visitors as they pay close attention to Lakeshore Grounds curator Jennifer Bazar.

Bazar led an Oct. 11 tour showing participants the old Lakeshore Psychiatric Hospital that now houses the campus and to learn more about the tunnels. During the tour, Bazar unloads years of knowledge she has memorized from giving many tours in Lakeshore’s unseen parts.

Decades before Humber took over the area, the campus was — and still is — famously known for housing patients as the Lakeshore Psychiatric Hospital. Founded in 1889, the facility continued treating mental health for 90 years until shutting down.

The former hospital’s tunnels connect to almost every building in the school. Staff still navigate through the corridors, carrying supplies across the campus.

It’s also how the school’s Tim Hortons refills their coffee so quickly, Bazar said.“There are people who work in the space, regularly going through with carts and that kind of thing. It’s how your (coffee) gets from the loading docks and out to Tim Hortons,” she said.

The tunnels saw lots of activity during the 19th century. The asylum was founded out of emergency, with a demand for mental health facilities skyrocketing in Canada.

“There were five asylums in existence across Ontario,” Bazar said. She explained the asylums were “full to the brim” with patients.

The situation at the time became so out-of-control that a bed for a single patient, turned into a space for four people at once. 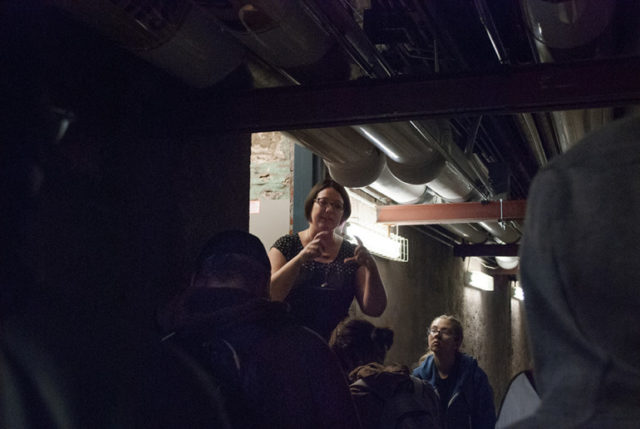 Visitors navigate through century-old walls along Lakeshore Campus’ underground tunnels, still in use by modern faculty. (Photo by Clement Goh).

“Part of the reason for that was simply the fact that there was no other form of formalized mental health care at the time. Today we have a lot of different options, most of those focus on staying with the community, so we can continue with our studies or our work,” Bazar said.

The tour was open to the public and not limited to Humber. One of the visitors, Lynn Hammell, said he believes the tour is an opportunity to learn more about his own family.

“It’s personal for me, because my mom was trained as a nurse here. So that’s why I have a personal connection to it all the way to the ‘40s” he said.

The tunnels weren’t the only place that was explored that Thursday. Guests were given the opportunity to go above the tunnels and roam Lakeshore’s abandoned attics.

Above the renovated cottages, the asylum’s attics echoed with creaking floorboards and through empty spaces where patients used to live.

“What I like about it is it’s bringing to life the history that not everybody knows,” said Nadine Finlay, Curatorial Assistant for Lakeshore’s Welcome Centre.

“You appreciate the space in a different way, rather than if you’re just coming here for school or living in the area,” she said.

Bazar is looking to turn the tunnel tours into a monthly event.

Since the Welcome Centre’s debut at Lakeshore almost two years ago, she said the department is doubling down on its teaching for 2019.“This year, we really wanted to make sure that people who are both within the community or students and staff have more opportunity to learn about the history of the campus, on a regular basis,” said Bazar, aiming to make the history “as accessible as possible.” “We’re trying to make sure those doors are open a lot more,” she said.