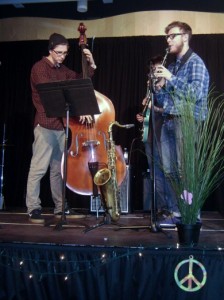 The Lusty Bulldogs were among the performers at Lakestock. PHOTO BY VANESSA MARCIANO

Humber College’s postgraduate public relations students brought back groovy music, Afros and peace signs as they travelled back in time as they hosted Lakestock on Nov. 26 at the Lakeshore campus.

Students, faculty and members of the community were invited to the event in the K Cottage, where they had the chance to see performances from students in a variety of different Humber programs.

Each year, the PR postgrads put together a Lakeshow event as part of their event planning class, but are required to come up with a different themes.

Chanele Jordan, a PR student and vice chair of Lakestock said after a lot of brainstorming, they decided to go with a late ‘60s theme because it is really fun, laid back and chill. The name change from Lakeshow to Lakestock referred to the iconic Woodstock music fest of 1969.

“We planned and executed the event ourselves since September,” Jordan said. “It’s obviously a really busy time for everyone right now, but it’s a great break.”

Some of the entertainment provided at the event included jazz band Lusty Bullfrogs, comedian Marc Hallworth, a Shakespeare performance, an Indian dance and more. Guests also had the chance to capture their memories at the fun and interactive Flashpoint PhotoBooth.

“All of us are based around the Humber music program,” said Gorzhaltsan. “Someone heard we were doing the Humber Christmas event and asked us to play here as well.”

Nancy Marino-Benn, public relations certificate faculty member, said the turnout for the event was outstanding and the students did a strong job with marketing and promotion.

On top of all the complimentary sweets and hot beverages, money was raised in a silent auction, which included a signed Montreal Canadiens Maurice “The Rocket” Richard jersey. There was also a raffle, which included tickets to both the Toronto Maple Leafs and Raptors.

All proceeds raised will be going to the United Way.