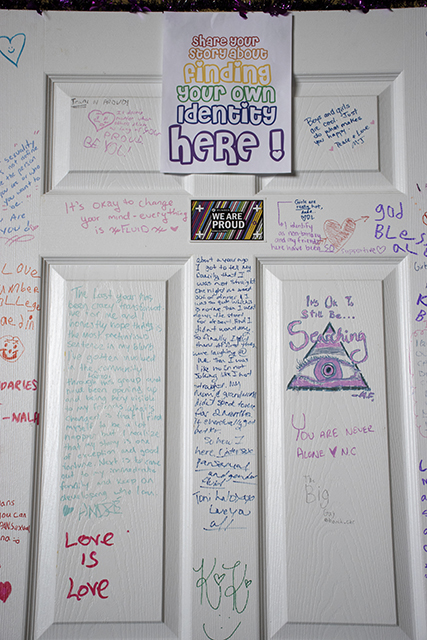 Students wrote words of encouragement and their coming out stories on a door. The door’s writings are all done anonymously. (Bailey Nantais)

Humber celebrated the 30th National Coming Out Day last week at an event put on by First Year Experience with the help of the LGBTQ+ Centre.

Students who walked into the E135 concourse on the North campus were met with an arch of colourful balloons, rainbow streamers, and a door to represent a closet. National Coming Out Day was founded in the United States on Oct. 11, 1988. It is now celebrated in many cities around the world.

Students were invited to write their coming out stories, or any messages they wanted to share, on the door’s surface.

One student wrote: “It doesn’t matter what others think, as long as you’re proud! Be you!” Other students also anonymously shared their stories about coming out.

Although many of the stories shared were lighthearted, one student wrote about a more difficult experience.

“About a year ago, I got to tell my family that I was not straight. One night we went out to dinner and I was quiet, which is not me,” they wrote.

“Finally, I told them. At first, they were laughing at me, then I told them I was not joking, I’m not straight. My Mom and Grandma didn’t speak to me for two months. It eventually got better. Now I’m here. Intersex, pansexual, and gender fluid!”

Najla Edwards, the LGBTQ+ Resource Assistant, said although Coming Out Day was run by First Year Experience, it was an important event to the LGBTQ+ Resource Centre. She said feeling empowered and supported enough to come out was something to celebrate.

Edwards, as a queer person, explained coming out is different for different people at different times.

She said it was important to remember no one lives anyone else’s life, or has their experiences.

“I need to be very open minded to be able to live in a world where we have seven billion people who all have different experiences.” Edwards said.

She said although Coming Out Day was successful, Humber needs to keep progressing with its efforts towards inclusion and diversity.

“This is my thing,” Edwards said. “National Coming Out Day is one day. There are 365 days.”

Edwards said it is important to push past single day celebrations, for the LGBTQ+ Centre and for other groups.

“There are other centres on campus like ARC, or BASE, who also do programming that’s specifically on inclusion. We need to do more together,” she said.

“I am encouraging centres and groups who don’t specifically do inclusion work to reach further beyond just celebrating the day of, so that it always feels inclusive,” Edwards said.