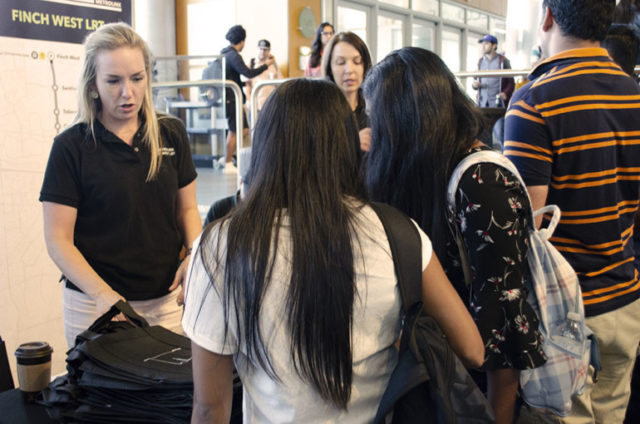 They’re building it — finally — and the students will come to Humber.

Metrolinx came to the Fall Services Fair at Humber College’s North Campus on Wednesday, Sept. 19, to talk about the $2.5-billion Finch West LRT, which will link the newly-constructed Finch West Station to Humber College North.

According to Infrastructure Ontario, the contract to build, operate and maintain the LRT was valued at $2.5 billion.

Luiza Sadowski, a community relations manager at Metrolinx, said some funding will come from both the provincial and federal governments.

“It’s a $1.2 billion-dollar investment from the province of Ontario, and the federal government has provided $333 million,” she said.

Sadowski said the LRT would differ from most streetcar routes downtown as the tracks are elevated and cars will not be able to drive on them.

The 11-km long Finch West LRT line with 18 stops and 11 km expects it to carry up to 2,800 people per hour one way during peak times when it begins operation in 2023, Metrolinx says.

A TTC report in May found the 36 Finch West bus was one of 23 bus routes that was frequently overcrowded during peak times.

It was also one of 26 bus routes that was overcrowded during off-peak times.

The bus route received a bump in service this month as part of the TTC’s efforts to reduce overcrowding.

The construction will add separate bicycle lanes on both sides of Finch between Norfinch Drive and Tangiers Road, and between Weston Road and Highway 27, according to Metrolinx.