Matthew Del Degan is changing the physical and mental landscape of Toronto, one robot at a time.

The Toronto-based artist and designer is responsible for creating the Lovebot, a 113 kilogram concrete robot with a heart. The bots have invaded downtown Toronto and can be found at local businesses throughout the city.

He spoke at the Humber Students’ Federation’s Real Talks event held at North campus on Tuesday, where he gave the audience advice on following their dreams and not letting fear be a guiding force.

“Trying not to be afraid is the main answer. It’s hard work, but it works,” he said.

Del Degan said his inspiration for the lovebots came from his daily commute to the Ontario College of Art and Design (OCAD).

He said he was having a friendly conversation with a stranger on a streetcar when he noticed they were the only ones talking. The rest of the passengers were preoccupied with their phones.

“They were acting like faceless robots going to work every day, and just ignoring one another,” said Del Degan.

This insight gave him the idea to create loving robots as a reminder for the people of Toronto to be kind and compassionate.

By adding a heart to these faceless robots, Del Degan hopes to inspire people to share the love and give a robotic city a heart.

“It’s a positive symbol of kindness and love and compassion, giving some positive vibes to the city,” he said. 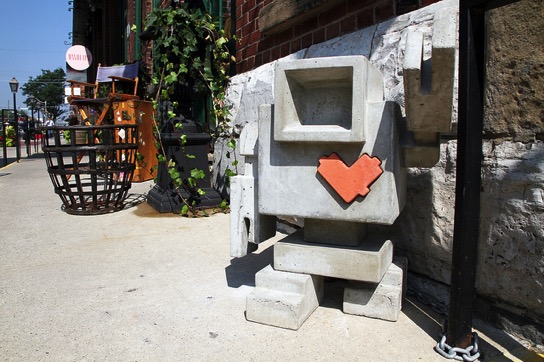 Del Degan’s Lovebots can be found across the streets of Toronto. (Photo: Alex Guibord)

Each Lovebot is unique and corresponds to a particular act of kindness. For example, Robot #3, located at a store on Mount Pleasant Road, is dedicated to Mable’s Fables, a bookstore that donates books to underprivileged children.

Del Degan has been working on this project for over six years, but said the Lovebots gained serious media attention in 2013. He calls his brain-child a “global love invasion.”

The crux of the whole project, said Del Degan, is to create a global movement that will last for hundreds of years.

The bots are currently Toronto-based, but Del Degan hopes this movement will gain traction all over the world. He aspires to do so by trading stickers of his iconic Lovebot with stories of acts of kindness.

While Del Degan’s sculptures have gained popularity, they haven’t been well-received by everyone.

Del Degan recounted a few run-ins with the law and said there are skeptics who believe he is trying to monetize love. Despite these “haters”, he said he is a strong believer in not needing permission or approval to do what you love.

To date, there are more than 100 concrete robots throughout Toronto’s concrete jungle.