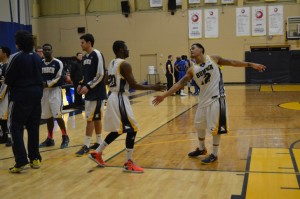 Canadian basketball players are being thrust into the spotlight with the NCAA’s March Madness talents on display. (WILLY PHAN)

As the NCAA’s March Madness inches closer, Canadian basketball players are making their impact felt at the highest level of college basketball in the world.

Members of the Humber Hawks believe more attention has been paid to Canadian players in recent years, which has led to the growing presence of Canadians competing in the NCAA and NBA.

All eyes will be on the performance of Canadian phenomenon Andrew Wiggins, who currently plays for the Kansas Jayhawks. Wiggins has been touted as the number one prospect for the 2014 NBA Draft.

“If you’re good (at basketball), you’re going to be found,” said Hawks point guard Zachary Fox-Tapper. “Scouts will find you, especially in this day and age with the media and technology.”

“Over the past five, six years, Canadian exposure has gone through roof,” said Hawks forward Chad Bewley. “You have North Pole Hoops, you have Crown Mag, and you have On Point. You have all of these different media outlets to give (Canadian) players exposure.”

Toronto native Anthony Bennett made history last June when the Cleveland Cavaliers selected him first overall in the 2013 NBA Draft, making him the first Canadian ever selected first in the NBA’s annual talent selection. His current Cavs teammate Tristan Thompson — also from Toronto — was drafted fourth overall in 2011.

The recruitment process is very different between the OCAA, CIS (Canadian Interuniversity Sport), and the NCAA because of regulations, said Bewley, who played three years for the York University Lions before joining Humber.

“There’s so much more money involved in the sport over there (in the U.S.) that they have to be even more careful that someone’s not paying someone off or doing something illegal,” continued Bewley.

Hawks guard R.J. Ramirez said there were other postsecondary schools that sought his talents while he was in high school, but he ultimately chose Humber based on the proximity to home and the school’s decorated basketball history.

“Niagara College, a couple of (junior colleges playing in the NCJAA) in the States…UNBC (University of Northern British Columbia),” listed Ramirez, who was recently named the 2014 OCAA Rookie of the Year.

Canadians who want to develop their skills and increase their exposure tend to leave Canadian high schools for prep schools and junior colleges in the US before getting recruited by NCAA colleges and universities.

“They’re starting to recognize the Canadian talent,” said Ramirez. “The people that are in the NCAA right now are making a good name for us (Canadians).”

“The future is bright. We’re finally getting recognized for the talent we have here north of the border,” said Fox-Tapper. “We’re going to start seeing more Canadians in the NCAA, more Canadians eventually in the NBA, and more Canadian superstars in the NBA.”

Although Canadians are finding more success with NCAA recruitment and, subsequently, in the NBA, there will always be players who fly under a the radar.

“There are players out there that are good enough to play Division 1 in the NCAA, but they get under-recruited or they’re just not from a known area,” continued Ramirez. “It’s all about putting yourself out there when you play out-of-school basketball in the summertime with the AAU.”

Bewley encourages young Canadians to participate in exposure tournaments and AAU basketball if they are trying to draw the attention of coaches and scouts from the U.S.

“If you’re playing somewhere over there, coaches don’t necessarily always respond to emails or highlight tapes,” advised Bewley. “They really wanna see you live. If you can bring your game somewhere they can see you, it can go a very long way for you.”