Marking an African past 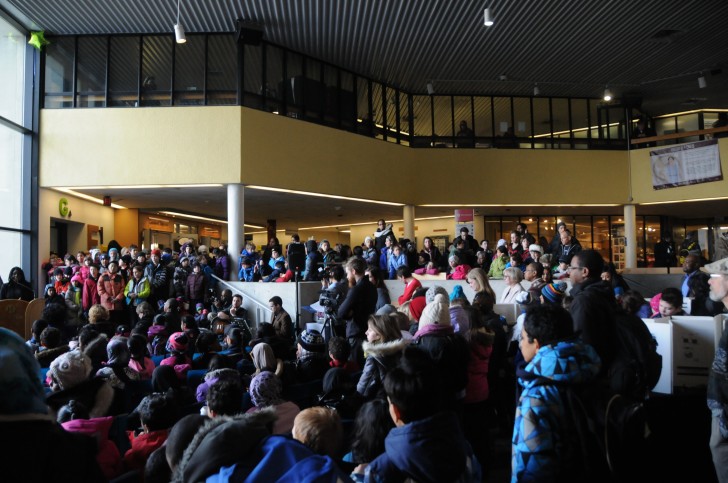 Inventors Museum in a packed concourse on Jan. 30-31.

Deb McCarthy, Humber vice President of Human Resources and Diversity made opening remarks at the launch by welcoming 386 public school students in Grades 1 through 5 from across the GTA.

“Our children are the future of Canada and there is no better way for Humber to share in their victories than to host them today,” said McCarthy.

Augustine spoke on the importance of Black History Month, saying it recognizes the contributions of African Canadians since 1603.

“Today’s exhibits have been all over the world, we hope you see something and develop it even more,” said Augustine, referring to long table displays of historical information on show in the concourse.

Augustine was presented with a certificate of appreciation and a bouquet of flowers on behalf of Humber College for her contribution to officially recognize Black History Month at the federal level in the 1990’s.

“The hosting of the International African Inventors Museum in January, symbolizes that Black History is Canadian History and it is important that we recognize and learn about the contributions and histories of persons of African descent,” said McCarthy.

“This is the third year we have hosted the event with approximately 800 students to attend,” said Nancy Simms, director for Humber’s Centre of Human Rights, Equity and Diversity.

Francis Jeffers, a former bio-chemist from South Africa now living in Toronto with a passion for working with children, is the creator and current science promoter for the museum.

As well as curating for the museum, he also runs his network of science club, vosnl.org, which goes to community housing areas in Toronto to engage children hands on with science.

“The museum shows innovation and diversity, it helps supplement the lack of diversity in the (Ontario school) curriculum,” said Jeffers.

Acoustic jazz styled music was provided by Humber duo Andrew and Dylan, who played the guitar, and saxophone respectively.

A few of the inventions on display included the skateboard design by Jesse Lee Drummer, the antenna assembly by Ronald L. Brown, a method for humidifying heated rooms by Andrew F. Hilyer and the first nine personal computer patents by Mark E. Dean, Ph.D.