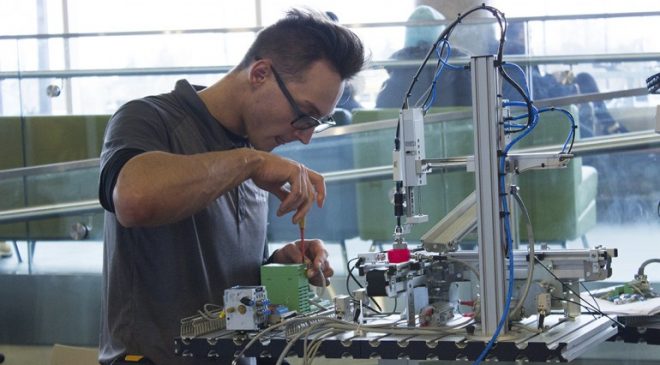 Humber’s Mechatronics varsity teams went neck-to-neck — or more like screwdriver-to-laptop — in a heated competition for gold and glory.

Former mechatronic champion Theodor Willert works for Humber and is currently coaching, organizing and judging for the event.

He said the teams that qualify will go on to the Skills Ontario Mechatronics competition in May. The winners then go onto the skills nationals, where they will be competing against the best in Canada. 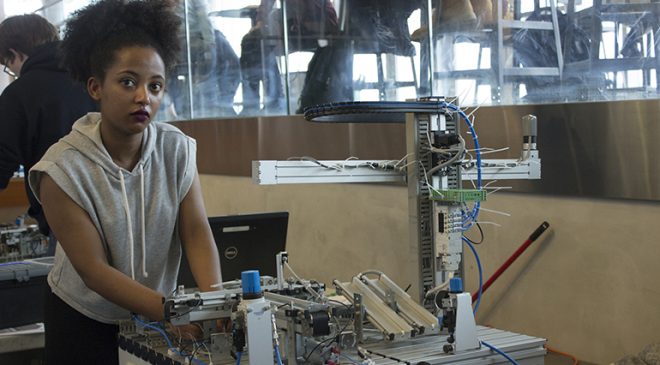 Maramawit Demisse with the creation she built during the mechatronics skills competition. (Michelle Neha)

They will also be fighting for a spot at the worlds skills competition being held Kazan, Russia, in 2019. The students of the electromechanical engineering technology program prepared for this competition from the moment they were interviewed to join the course.

“We begin with a group of students from the first year of the program and we train two to three times a week,” Willert said. “We teach them how to disassemble and assemble the (training stations) and how to program them.”

Third-year electromechanical engineering student Mateus Cwalinski was competing in the skills competition for the third time while at Humber.

“It’s an amazing experience to compete in this skill set, it’s nerve racking also but it’s very fun,” he said.

Teams raced to complete a part-handling and part-sorting system in less than six hours with the least amount of errors. They were judged on professional practice.

The competition also caught the eye of future employers. The participants were scouted by industry professionals merely minutes during the competition as students.

Willert recalls being offered jobs as he earned bronze in the 2016 world championships in Abu Dhabi. 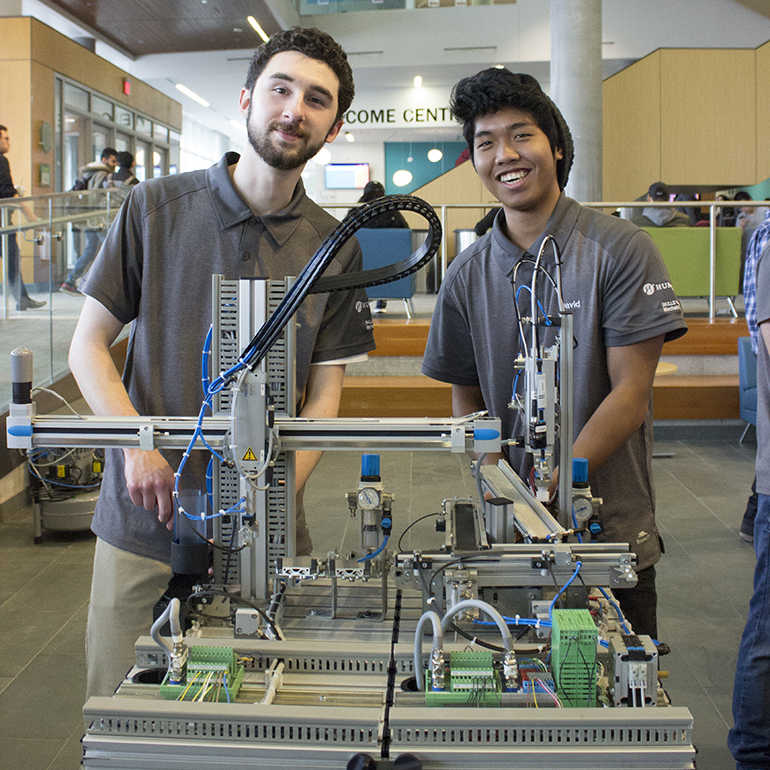 “I’ve been interviewed at competitions, I’ve been handed job offers just off the stage,” Willert said. “When I got a job out of school I did not hand out a resume. What I’ve done and what I’ve built and what I’ve achieved has shown for itself.”

David Anselmo was the second place winner in last year’s competition and he said that he did not let the scouts distract him.

“Impressing some company bigwigs is always a nice bonus,” he said. “We were too focused to notice, but from what our mentors told us, we caught some attention.”

The speed, precision and skill are cultivated in students over five months starting in September and many students come back to compete.

“I started in my first year, I went to provincials and got second,” Cwalinski said.  “Our plan is to train hard, to do our best and be precise and win.”The competition challenges mental and physical stamina, training up to 10 hours a day preparing for the nationals, said Bogdan Malynovskyy, one of the Humber contestents. Willert said one team member might choose to specialize in more advanced programming, while the other one will be better as a mechanical tech as it’s difficult to have two people doing the same thing at the same time.

These competitions take students all over Canada and are funded by federal and corporate sponsors.

“We find funding, Humber has been very generous in supporting it cause of the advantage,” said Darren Lawless, Dean of Applied Research and Innovation. “We have some corporate sponsorship as well, if it’s important to the students then we find a way we to make sure they have the opportunity.” Director of the Centre for Technological Innovation Neal Mohammed is proud of how well Humber teams have done in the competitions in the past.

“Almost every year we’ve advanced to the nationals since 2004. We have 22 gold medals,” he said.

The results of the Mechatronics competition will be announced next week.