Medication not only option to fighting insomnia

People who experience a sleep problem that interferes with daytime functioning may be suffering from insomnia if the problem has persisted for at least one month, said Dr. Judith Davidson, a clinical psychologist and sleep researcher with the Kingston Family Health team and Queen’s University.

“Usually there is some kind of stress that initially triggers it, like exams, a relationship breakup or a loss of some sort,” said Davidson.

The insomnia is then maintained by other factors different from what initially triggered it.

“Those factors tend to be racing thoughts and changes to your bedtime and rise time,” said Davidson.

Examples of racing thoughts include, “Oh my goodness I’m not going to get enough sleep and it’s going to be a terrible day tomorrow,” she said.

“Anxiety about sleeping becomes this self-fulfilling prophecy,” said Andrew Tibbetts, a councillor at Humber. “Our thoughts hypnotize our behaviour in a certain way.”

Sleep is more complicated than people may think, said Tibbetts. “You don’t just lie down and do nothing for eight hours,” he said 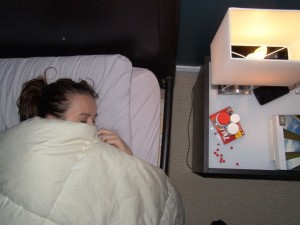 Everyone has a sleep architecture, which means that a person is supposed to spend a certain amount of time in phase one, two, deep sleep and dream sleep.

“If the pattern is off then you may get up feeling not rested even though you were asleep,” said Tibbetts.

There are many treatments for insomnia. Prescribed sleeping pills, known as benzodiazepine receptor agonists, work right away but may lose their efficacy and may be problematic, said Davidson.

Sleeping medication can alter the architecture of your sleep, said James Sayegh, the technical director of the North Toronto Sleep Centre.

“Some sleeping drugs will change your sleep distribution,” said Sayegh.

According to the Canadian Sleep Society, clinical studies have shown that 70 to 80 per cent of people with insomnia can benefit from behavioural treatments.

Cognitive behavioural therapy for insomnia (CBT-I) is one treatment that many experts have been praising.

The therapy trains people to sleep naturally, which is much better than subjecting the body to the artificial chemical needs of suppressing the nervous system, said Tibbetts.

“Cognitive techniques deal with the racing thoughts,” said Davidson. “CBT-I looks at those thoughts and makes them more realistic.”

It’s best to keep some regularity to your sleep and a dark bedroom helps, he said.

“Plug your cell phone in the kitchen and put your TV in the family room,” he said. “Bed means sleep, that’s its purpose.”