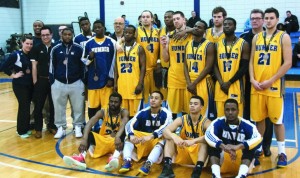 After failing to medal last season, the Hawks brought home a bronze in OCAA tournament action this season. (Jeff Sehl)

The Humber Hawks men’s basketball team closed a strong 2013/14 season with an OCAA medal, but the medal wasn’t the colour they were hoping for.

After defeating Seneca College in their quarterfinal match-up on Feb. 27, the Hawks fell short the next evening against the undefeated Algonquin Thunder 75-48, forcing the Hawks into the bronze medal bracket of the tournament.

They followed the loss with a dominant 81-60 win over George Brown College in the bronze-semifinal the next morning before closing their season with an 80-65 bronze medal victory against Durham College later that evening.

“It hurts when you work so hard all year, put in all that time, and don’t get a gold and get to go to nationals in (Squamish) B.C.,” said graduating power forward Brett Neumann.

Despite winning a medal, falling short of an OCAA championship and a spot in the national championships was a disappointing end to an impressive season.

“We came in here and we won three basketball games,” said head coach Shawn Collins. “It wasn’t the three basketball games we wanted to win…but to lose and have to recover and win two games in one day showed a lot of character. Other than the team that wins gold, it’s great to finish the season with a win.”

In the gold medal matchup, the Sheridan Bruins came away with an exciting 76-75 win over Algonquin College, and will head to the CCAA national tournament which is takes place in Squamish, B.C. from March 13 to 15. A Sheridan win at nationals could benefit the Hawks and the OCAA as the winning conference will be able to enter two teams into the national tournament next year.

The Hawks hope to earn one of those two potential spots in the national tournament next year and use the experience their young squad gained this post-season to move forward into the 2014-15 season.

“It was a big experience for me because it was my first OCAA tournament,” said first year point guard Zach Fox-Tapper. “It’s a different ball game. It’s the next level and it’s everybody’s best because it’s one (loss) and you’re done.

“It was a character game,” he said. “You’ve got to pick up the pieces. We know it stings, we know it hurts…but you have to play your hardest every time you put your uniform on, and they stepped up and played hard, especially our young guys.”